At this time the Police have confirmed on television that they believe Paddock did not act alone.  Many witnesses on the ground and at other hotels have also come forward to tell their side of the story, that there was more than one shooter.  Below is a video of a woman in the Bellagio Hotel, which is 1.6 miles away from Mandalay Bay, explaining that as she was sitting at the lounge they heard shooting in the casino area.  Her story is confirmed by the man adjacent to her.

Remember the report this woman who was at the concert made to reporters.  She affirmed multiple times that other shooters were on the ground an came after people in the parking lot and started shooting people.

These reports below detail the events happening just after the neutralization of Paddock at Mandalay Bay.  Now that we can confirm from on the ground witnesses in these videos (whom did not make police reports) that there were other active shooters at on the ground, look at the Police report on the left, this tells us that other shooters were reported to be at New York New York Casino,  at the Bellagio, and another at Tropicana.  And the picture to the right is of scanner feed from early Monday morning, it reads (at 11:25pm) “shots fired at multiple hotels. mass casualty event. multiple confirmed dead and injured. possible explosive devices in cars. multiple shooters still at large. additional reports of active shooters at other hotels on the strip”. 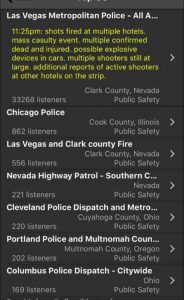 This new and revealing information presents the public with a series of questions, starting with who were these other shooters?  Why has the MSM not interviewed any other character witnesses of Paddock?  And why do authorities continue to assert that there was only one shooter?


Considering the target group, was the attack politically motivated homegrown terrorism from a far left group against what the shooter(s) saw as right-wing predominantly white Americans who voted for Trump?  America needs to know.


Previous 4 Teens Bully An Elderly Bus Monitor To Tears. Days Later She Gets A Call From A Stranger