Cleveland Browns protested the national anthem, as a result of Ohio county deputy decline to provide security and protection. Sheriff Scott Hildenbrand prohibited his officers from being off-duty securities at Cleveland Browns games. 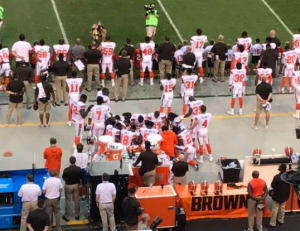 Hildenbrand posted on the Geauga County Sheriff Facebook page: “Yesterday I attended the Browns game in Indianapolis with some friends, the stadium was almost full with 70,000 fans in attendance. During the National Anthem at least 21 Browns players kneeled as the entire stadium, made up of all races, ages, sex, religion and careers stood and removed theirs hats. All the police officers working in uniform were saluting.”

He thinks that players should not use their fame to protest the national anthem and follow President Trump’s order and stand. Hildenbrand continued, “The fact that the team owners and NFL Commissioner condone this activity very much upsets me, as far as I am concerned almost the entire league disrespected every veteran that ever fought or died for this Country. These protests are not about unity, unity was the other 70,000 fans that stood. I truly believe this is about the police, law enforcement and our government. For that reason, effective immediately any off duty details at NFL Games are prohibited.”


Hildenbrand believes the American flag and the United States military are disrespected by the protest.

“I’m concerned when the main act stands in front of the crowd, before the game even starts, and commits a blatant disrespectful act towards our flag, our Country, our Veterans and our first responders,” wrote the sheriff. “If they do not have respect for us and our Country only bad things will come of that. We will not be a part of these activities.”

President Trump told NFL owner that they need to fire the players who kneel during the national anthem. However, NFL players and many owners are pushing back against Trump.

The protest aimed to raise awareness to police brutality and racial inequalities in the United States.

After Trump’s ultimatum, Roger Goodell NFL commissioner said he was proud of his players.

“They reflected the frustration, the disappointment, of the players over the divisive rhetoric we heard [from Trump], we live in an imperfect society. A public discourse makes us strong.”


Previous Do You Agree With Rush Limbaugh’s Claim That The Democrat Party is America’s Largest Hate Group?

Next World’s Oldest Person Dies At 117. Before Passing She Offered Simple Advice To A Long Life