On Tuesday, on his nationally syndicated radio show, Conservative talk, Rush Limbaugh made observations about the mood of the Liberal Democratic Party that he defined as resentful and unhappy. 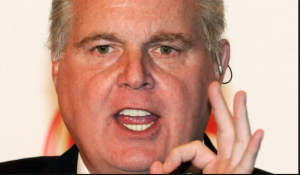 “Let me tell you something, folks. There is an inescapable observation and conclusion, and it is this.

You have to look very hard — and you have to spend a long time looking — to find a genuinely happy or content left-wing political person. Whether they’re an activist or not. If they’re engaged in any way, shape, manner, or form of politics, they’re not happy, no matter what. When they elected Obama, they got angrier. They got more enraged. After every success they have, nothing is ever enough. No amount much success ever makes them happy.


Every success they have seems to tell them how little they’ve actually done and how much more there is and how deeply resentful of that they are. The bottom line is: You just don’t encounter happy, laughing liberals. Even their comedians are consumed by hatred. The Democrat Party’s become the largest hate group in this country. Even their comedians are angry and enraged, and that suffices as comedy. I think it’s one of the reasons why left-wing comics have become primary sources of news for other left-wing liberals.

So there’s never any happiness, there never is any contentment. You don’t see any real laughter. You just see a constant level of rage — and I’m telling you, it isn’t healthy. Talk about sustainable? That cannot be sustained. A healthy mind and heart cannot be sustained by the degree of rage and hatred that we see in the American left today. You have to ask: Why don’t their successes make them happy? Look at what they’ve done in the area of marriage. They’ve totally upended it.

They have succeeded in not just redefining a word that has stood for however many number of years — tens of thousands, hundreds of thousands, millions of years — that humans have been plodding and walking the earth. And even after they succeed with this, they get angry. They don’t ever seem satisfied. It’s the most amazing thing. And we’re all paying the price for it, this constant rage, this constant anger. They lose elections, and it is taken as one of the most outrageous things that could happen.”

Liberals show how uncontended they were, only more determined to pushed hatred to anyone who disagrees with them. In order to win elections Democrat politicians have beat their liberal base into anger and when they lose, the violence becomes acceptable in their minds.


Previous How To Throw A Cast Net, Without Putting Anything In Your Mouth [WATCH]

Next Cleveland Browns Who Protested The Anthem, Just Got Bad News; Start Panicking