A couple in Florida was alleged of prostituting a young girl for 13 long years in exchange for drugs.

The accused were Kevin Wyatt and Celeste Chambers are arrested after trading sexual acts with a young girl for drugs.  It is believed that the trade of sexual acts begun in February 2003 when the girl was three years old at that time. 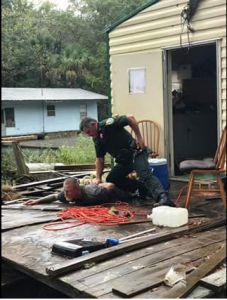 On Friday, she was re-arrested together with Wyatt. The couple was charged with three counts of sexual assault, one count of lewd or lascivious behavior and one count of cruelty toward a child.


Sheriff Franklin posted on Facebook about the couple arrest on Sunday. His caption also included how they found the couple.

“Great work this afternoon by FCSO and FWC capturing a fugitive from Gadsden County who was wanted on 5 warrants to include sex trafficking. Kevin Wyatt prostituted a young girl for 13 years in exchange for drugs. He was hiding on a houseboat off East River.”

After this was posted on October 09, it receives a different reaction from the Facebook user.

Here are some comments of the Facebook user who upset of the couple’s action:

“God Bless that child! How horrific for her to have to endure the sickness of these pieces of S%it. May they rot in Hell.”

“Glad they got him shame he got away with it for soooo long.  But it’s over now for him.  Lock him up for life.”

“They can burn in hell. People like this should not b on this earth. The sad part is I knew them from the past.  It’s just sad and hurts so much.”

Most of the comments commended the police for a job well done.

“So glad we finally have a Sheriff’s Department to be proud of thanks to Sheriff A.J.!”


Previous Lindsay Lohan In Some Weird Fake Accent Speaks Out About Harvey Weinstein, Then Deletes It [RAW VIDEO]

Next Her Veteran Husband Dies In A Tragic Accident. One Month Later God Delivers Her A Miracle