Courtney and Brian are married for years. Having a happy and healthy marriage they are blessed with a beautiful child. In February 2016, their marriage has changed when Brian was killed in a terrible truck accident.

Brian is retired Navy veteran who has served in Iraq, Afghanistan, and Kuwait. Courtney and Brian met in 2011 and had their first child named Reagan. They want to have a bigger family so Courtney tried to conceive a baby again. But when Courtney finally got pregnant, her husband passed away.

A month after Brian’s death, Courtney was sent to the hospital when she had experienced a disturbing pain. She feared of having a miscarriage. She got shocking news when arrived into the office. Courtney was not carrying one baby, but three. 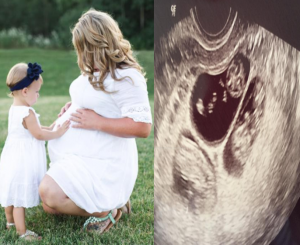 According to Faithit, Courtney’s said: “My jaw DROPPED, I’m excited to have three more smiles that remind me of him.”

However, during her pregnancy, she lost one of the triplets which he named Brady.

“It caught me off guard. I wasn’t expecting to hear that news at the ultrasound. It reminded me of the loss of my husband, with his loss came blessings. I lost Brady but I was given two newborn babies who are healthy. Most triplets have weeks in intensive care. Not in my case, everybody went home the next day. We have suffered, but we also have been blessed with little miracles.”

On September 21, 2016, Courtney gave life to her two babies Harper and Miles. She struggles to explain Brady when people ask if she had twins.

Despite her struggle to be the single parent she is determined to be a great example. She always includes her husband in doing things as a family.

“They will all know about their dad,” Courtney said. “From military, to family man…he was the true hero. He was an amazing man, always willing to help others. He was just an amazing father and husband. He was perfect.”

Next Man Arrested For Allegedly Marrying Stepdaughter At Age 12, Holding Her Captive For 19 Years