In the United Kingdom,  famous food chain served poop. In BBC One’s Watchdog investigation, it was revealed that three famous fast food chains are serving ice with fecal coliforms. The famous fast-food chains were McDonald’s, Burger King and KFC. It was uncovered to be dirty places to drink cold drinks. 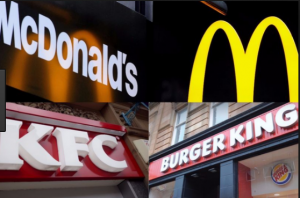 The result they got after they tested the ice at 30 random places in the United Kingdom was truly shocking and horrible.  For each major chain, BBC One’s team chose ten locations. It was discovered that three Mcdonald outlet, six branches of Burger King and seven KFC branches has fecal matter coliforms in their ice. Four Burger King branches and five of the KFC locations provide their customer significant amount of poop bacteria in their ice.

According to NYdailynews KFC spokesperson said: “We are shocked and extremely disappointed by these results.” Statement added that ice machine shut down at the branch that was infected and ones from all other restaurants in the United Kingdom.

McDonald’s spokesperson claimed that the safety of their customer is their concern. They also confirm that they are already implementing strong protocols in their outlet to ensure that this won’t happen again.


“As the investigation highlights, there are no specific ice production standards in place, only those relating to unfrozen drinking water. We would therefore welcome the introduction of an agreed standard and would be happy to work with relevant industry bodies,” the McDonald’s representative added.

On the other hand, Burger King said that they are coordinating with its branches to strengthen their cleaning procedure.

“This report is an opportunity for us to emphasize our training procedures and ensure all operations and safety standards are upheld in all restaurants.”

According to Independent, due to the disturbing discovery, BBC One’s Watchdog consulted the head of policy and education at the Chartered Institute of Environmental Health, on the findings. Tony Lewis said, “It’s extremely worrying. When we’re finding the sorts of numbers we’re finding here, you have to look at the people making the ice, handling the ice, which they then transfer into customers’ drinks. And then you also have to look at hygiene failure with potentially the machines themselves: are they being kept clean?”