A brave mom got shot in the back while trying to shield her boyfriend’s body in the Las Vegas mass shooting. 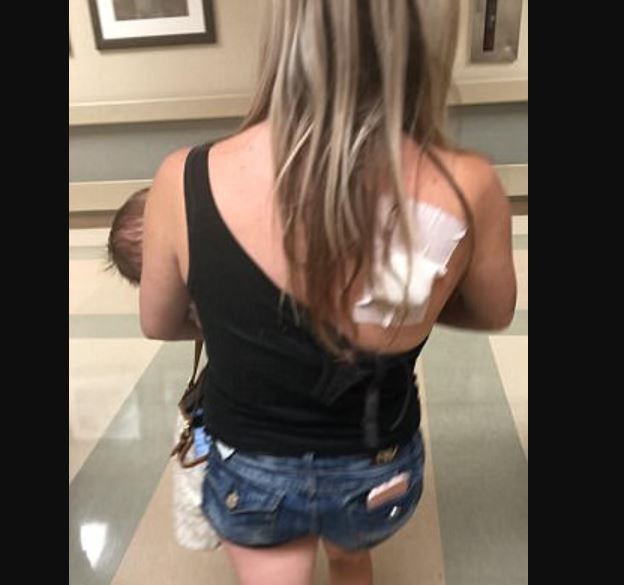 Summer Clyburn, 22, who has a three-month-old daughter, protected her partner Michael Gracia, an off-duty police officer who had been shot in the head.

Clyburn was treated for a gunshot wound at her back, while her boyfriend, was rushed to surgery with a serious head injury.

The 24-year-old was said yesterday to be in a critical but stable condition.


The couple, from Upland, welcomed their baby daughter, Vayda Gracia, into the world in June. The infant is not believed to have been with them at the festival.

At least 59 people were killed and more than 500 others were injured when retired accountant Stephen Craig Paddock opened fire on revellers.

The 64-year-old, from Mesquite, Nevada, rapidly sprayed bullets at the crowds while perched on the 32nd floor of the Mandalay Bay Hotel and Casino.

He then killed himself before police stormed his hotel room, where they discovered 23 weapons, as well as hundreds of rounds of ammunition.

During the terrifying attack, Michael was shot in the head.

Moments later, Summer was struck in the back while desperately trying to cover her boyfriend’s wounded body, according to the couple’s friends.

A GoFundMe page has already raised $60,000 dollars for the young family to aid with medical bills and their recovery.

Well-wishers started the page shortly after the news of his injury emerged. Prompting a rush of donations from across the country.

The couple, from Upland, California, had a daughter Vayda Gracia in June.

They were enjoying the Route 91 country music festival when Stephen Paddock, 64, open fired from the 32nd floor of the Mandalay Bay resort hotel.

It comes just hours after it emerged that Paddock – identified by cops as the lone Las Vegas gunman – had a deadly arsenal of weapons at his disposal.

The killer first opened fire on the Route 91 Harvest Festival, opposite the hotel, at around 10pm local time. He didn’t stop for at least 15 minutes.

At around 11.20pm, police located Paddock, described by his brother as a multi-millionaire property developer, after the smoke from his guns set off alarms.

He reportedly shot and wounded a hotel security officer in the leg through the door of his suite then killed himself, before police entered the room.