Brothers and sisters that were separated for a long time, has been reunited with the help of the internet.  Christina Housel was an adopted child, as she became a mother she was determined to know her family story. To know more about her past she started to investigate about her biological mother and possible siblings.

The result of her online investigation was very surprising. She finally found Lyles James Berryman, her brother. Lyles was hesitant about meeting Cristina at first but eventually she has convinced him. To meet her brother, Cristina travelled all the way to Arizona.

When they get together, they shared childhood stories and related pictures. Their looks are undeniably similar, it is certain that they are related. During their meeting, Cristina has told Lyles about their twin sisters. Lyles still remember them; however, both of them do not know the whereabouts of the twins and so they decided to look for their sisters.

Overwhelmed by their meeting Christina was extremely shocked when Lyles reveals that their biological mother has passed away when Lyle was young. 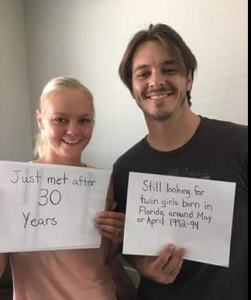 So they decided to post a picture on Facebook. When a caption: “Hey guys!! So all of my family and friends should know by now that I have found my biological brother after almost 30 years! I found out we have twin sisters that we are looking for as well and were born on the west coast of Florida! Lyle and I would love to try and find them! Can you please like and share this and get it around fb and maybe we can find them this way?!? All my Florida friends especially!!!”

Shortly after they posted the picture on Facebook, twin sisters Lauren Rutherford and Ashley Bo speculated that they might be the girls they are looking for. After realizing that they certainly look like them, they immediately arrange a meeting with their possible brother and sister.

The four siblings has confirmed that they are all relative to each other. The four just spend so much time on catching up after how may years of being separated from each other. For all of them this experience is overwhelming and emotional.