It’s no secret to anyone who has been paying attention to the fine points of culture and politics that the entertainment industry has driven the bus on advancing progressivism in the American culture.

And as we have seen, since yesterday when John Boehner was re-elected as House Speaker, there are severe consequences for those who don’t play nice under political protocol.

In this era of highly charged progressive politics, many Hollywood elites march to the progressive tune in order maintain favored career status. However there are exceptions and the latest superstar to step in to the cold light of day, and proclaim faith and allegiance to a host of conservative values, is Kid Rock. 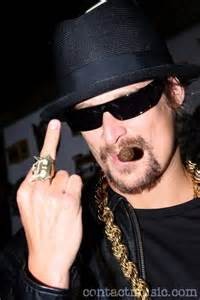 Since the uncovering of Friends of Abe, a slow trickle of Hollywood stars have spoken up to defend their conservative values only to face the wrath of the IRS, one of the biggest stories of 2014. But maybe that will change as their numbers grow, so to speak.


A few days ago, Kid Rock, in an interview with The Guardian came out of the closet and set the record straight on what lies behind his rock star persona.

At his core, he is a rebel, and perhaps that’s what drives his outspoken stance. He makes no apologies for his wealth or the fact he is a Republican. He’s not for homosexual marriage, but doesn’t oppose the lifestyle, and he’s a big 2A guy, among other things.

As more conservative rockers speak out, there are still those who insist on protesting the founding principles and use their rock star profile to attack them. Last year, The Boss (Bruce Springsteen) dissed fellow New Jerseyan, Chris Christie, and Dixie Chick, Natalie Maines, stands by her international snub of George Bush.

That’s ok. Neither seem to be burning up the charts these days. Perhaps the people have spoken with their wallets, or maybe they just don’t have the juice they once had in their hay-day.

Either way you look at it, it’s becoming more and more popular to exercise freedom of speech, in or out of the entertainment industry, progressive or conservative, and that rocks.

Now there are rumors of his run for Senate below is some info about that:

Musician Kid Rock, who says he’s exploring a run for the Senate, delivered an R-rated political speech in Detroit on Tuesday night, chastising everyone from Nazis and professional athletes to single moms and deadbeat dads but pulling up short of officially declaring his candidacy as some had anticipated.

The singer, née Robert Ritchie, debuted his political material last week during a performance in Grand Rapids, Mich., according to the Detroit Free Press. He rebuked the same newspaper earlier Tuesday, revoking its press credentials for the Detroit show and berating editors for publishing an opinion piece that criticized him.

Kid Rock is a vocal, opinionated supporter of President Trump, and has hinted for months that he may challenge Democratic Sen. Debbie Stabenow, who is expected to seek a fourth term next year. He launched a website over the summer to gauge his viability.

The event at Detroit’s newly opened Little Caesars Arena, the first of six concerts there by Kid Rock, attracted protesters offended by his past use of the Confederate flag as a prop during performances, and his fierce disapproval of NFL players, namely Colin Kaepernick, who have called attention to social injustice by kneeling during the national anthem.

Those protesters were countered by Kid Rock’s supporters, some displaying the controversial Confederate symbol many associate with slavery and America’s long, deep divisions over race, but there were no immediate indications of violence.

And then the venue went dark.

“Ladies and gentleman,” a public address announcer finally boomed. “Will you please welcome the next senator of the great state of Michigan, Kid ‘m———ing’ Rock.”

The eruption of applause was quickly dowsed by the piercing brass notes of “Hail to the Chief.” He gestured to the audience before striding to a lectern emblazoned with a knockoff of the presidential seal and the words “United States of ’Merica.”

And for the next four minutes he cursed and rhymed (and cursed some more), trumpeting his patriotism and lamenting all that ails our nation, in his view.

He opined about government-mandated health care:

It seems the government wants to give everyone health insurance, but wants us all to pay. And to be very frank, I really don’t have a problem with that, since God has blessed me and made my pockets fat. But redistribution of wealth seems more like their plan. And I don’t believe you should save, sacrifice, do things by the book and then have to take care of some deadbeat, milking the system, lazy a– m———ing man.

He called out single mothers who, in his view, over rely on government assistance:

The issue of struggling single parents is an issue close to my heart. But read my lips: We should not reward those who can’t even take care of themselves but keep having kid after f—ing kid.  Of course, we should help them out. I don’t want to stand here and sound like a jerk. But let’s help ’em out with child care, job training and find them a f—ing place to work.

Nazis. F—ing bigots. And now again the KKK? I say f— all you racists. Stay the hell away.

He expressed support for gay marriage but drew a hard line on transgender rights:

Things shouldn’t be this complicated and, no, you shouldn’t get to choose. Because whatever you have between your legs should determine the bathroom that you use.

He prayed for God’s guidance in America’s ongoing struggle with crime and terrorism.

And before closing, he called for unity:

And I do believe it to be self evident, that we’re all created equal. I said it once, I’ll scream it again: I love black people. And I love white people, too. But neither as much as I love red, white and blue.

Kid Rock’s full speech is below.


Previous JENNIFER LAWRENCE: Says She Was Told 'Perfectly F#@kable' at Age 15, Made To Shamefully Stand Nude In Lineup... [RAW VIDEO]

Next Alan Jackson's Daughter Speaks Out, Revealed What Everyone Suspected For Years