Action News Jax reported that Smiley hired a pilot to pull a banner that encouraged fellow Jacksonvillians to boycott the team:

A man from Green Cove Springs took his issues with the Jacksonville Jaguars and the NFL to the sky on Sunday.

Terry Smiley had the message printed on a banner that was flown above EverBank Field before the Jacksonville Jaguars’ game against the Los Angeles Rams.

This all-American sport is dividing fans after some NFL players took a knee during the national anthem.


“I am asking people to boycott the football games. I don’t watch it on TV,” Smiley said.

People’s feelings about politics and football seem to bleed together on the turf. 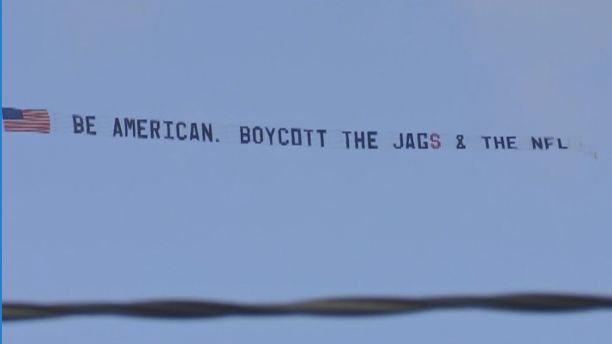 If there were going to be a medal for the most dedicated to the boycott, this guy should get it. He’s not only sending the message to his friends and family, he paid for it to be flown right over the player’s heads so they could see his disdain.

Many of the entitled millionaire players who have been participating in this boycott consider it to be their right to protest, and until the teams say that they can’t, it is. It’s also the right of every betrayed fan to make them regret it in any legal way possible. This is an American who’s ready to put his money where his mouth is, and obviously, he’s making waves.

Smiley is not only interested in getting the boycott more strength, but he has a few questions that he’d like to ask the players:

As a former Jags fan, he hired a pilot to fly his banner over the stadium for two hours to send his message about players kneeling.

“I have the right to protest and I’m going to protest it with bumper stickers, airplanes – whatever I go to do. I will continue to protest,” Smiley said.

He does have the right to protest, just like they do. And unlike the football players in question, he’s not taking the money of the people that he’s protesting against. The players in the NFL may be employed by the teams, but we are the team’s customers, so it’s our dollars that they’re spending on those fancy knee pads that they’re keeping in the dirt.

Some fans are on the offense, saying players are kneeling for a greater cause – equality.

“They are taking it in a peaceful manner. They are trying to use their words and use their actions instead of taking it to violence,” Jaguars fan Jaumari Day said.

“They have publicly stated that they care about veterans and the flag and that’s not what they’re kneeling against,” Crossman said.

Smiley is giving away bumper stickers in hopes his supporters will join him and boycott NFL football.

“We boycott them and we hit them in the pocketbook where it (hurts) them. (Before) long, we’ll have them on both of their knees,” Smiley said.

“We have people who are legitimate concerns who happen to be NFL players. They still live in the community. They have a right to protest. That’s (Smiley’s) right. Just like the NFL players who take their knee that’s their right. He has the right to do what he is doing,” Jaguars fan Calvin Sinclair said.

The very pointed message that Smiley sent to the Jaguars players is one that many of us have wanted to send for a long time but were unable to find a large enough platform for. The problem that fans have the with the NFL players is not that they have a differing opinion than us. We might think that they’re wrong, but they’re allowed to be wrong, that’s the beauty of America.

The problem that we have is that our hard earned dollars are going toward giving them an international platform on which to flip off the American flag. You don’t have to agree with a person in order to live peaceably with them, but you do have to agree with them in order to fund the furthering of their agenda. Smiley found a way to hit back, and we’re all glad he did.


Previous It Costs Taxpayers MILLIONS to Remove All THESE Confederate Statues

Next She Sprays a Spider to Kill it, Seconds Later Her Worst Nightmare Begins