A security video showing a couple having sex inside Domino’s Pizza were both pled guilty on charges of outraging public decency at Scarborough Magistrates court.

The incident took place after Daniella Hirst and her boyfriend Craig Smith watch the football game between Leeds United and Sheffield. After the game, the two decide to get food from Domino’s Pizza. They stood at the counter while waiting for their food to be ready. After waiting for a few minutes the couple was already exasperated. Instead of getting angry at the crew they had sex inside the establishment. The sexual act was recorded on a security video at the store which was uploaded by an employee online.

Hirst was notified about her video but she just laughs them off and said that employee in the store told them to behave and laughed. She even wrote in social media there is nothing wrong in getting frisky in a pizza shop, she called her critics “boring”. 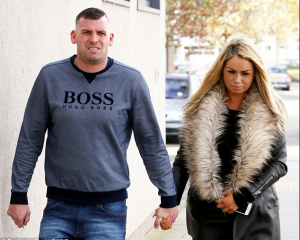 The two were sentenced to 12-month community orders. They were also ordered to observe curfew for 23 long weeks at 7pm-7am and was required to wear an electronic tag. Court documents also show that they were ordered to sleep at separate homes for 6 months.

Hirst is obliged to accomplished rehabilitation activity for 10 days and 15 days for his boyfriend Smith. Smith will also need to complete unpaid work of 200 hours.

According to Independence, Charles David Chairman of the bench said: “You were both very close to going to prison. It was brazen offense, committed in a public place over a prolonged period and in the presence of the staff. The harm caused was to the public who were outraged after the CCTV was released on social media. Mr. Davis said that while there is no “identifiable victim” in the case and the couple were clearly under the influence of alcohol, the potential for harm was “significant”.


Previous KFC Posts Sign About Police That Has Customers Upset – KFC Responds: Sorry, It Stays Up