What were the warning signs?

She said that he “had an assault weapon and that she was scared of him.”

According to the report, she called the Newtown police, but they told her that since Lanza’s mother owned the guns legally, there was nothing they could do and that she should try contacting the state police.

Another source said that Lanza’s mother was concerned about him being a “shut in” who had not left his room in three months.

Another source said that Lanza rejected the medication he was provided for his Asperger’s syndrome condition, a diagnosis he also rejected.

“Nancy [Lanza] would take care of all of Adam’s needs,” the person reportedly said. “However, she never cleaned his room, nor was allowed in his room. Adam’s room was his personal space that no one else was allowed into.”


Where is this information from?

The FBI released 1,500 pages from the investigation Tuesday into the shooting that stunned the nation. Some of the information was heavily redacted, according to CBS News. Lanza killed 20 students and six adults in the Sandy Hook Elementary School attack on Dec. 14, 2012. The shooting spree ended when he shot himself.

On December 14, 2012, the world watched the news with horror as they heard the story of 20-year-old Adam Lanza fatally shooting 20 children between six and seven years old, as well as six staff members at Sandy Hook Elementary School. Since that fateful day, conspiracy theories have abounded from whether or not the shooting actually took place to what Lanza’s motive was.

Adam Lanza is believed to have shot his mother, Nancy Lanza, in the head at her home in Newtown, Connecticut, around 9 a.m. on December 14, before taking her car and driving approximately five miles to the Sandy Hook Elementary School, where he would slaughter the children and teachers.

According to reports, most of the shooting occurred in two of the school’s first-grade classrooms; 14 students in one classroom, and six in the other, were murdered. Only two of the victims who were shot by Lanza—both teachers—survived the attack.

Now, the documents which could lay to rest many of these conspiracy theories have been released by the FBI. At 10:00 AM EST, on Tuesday, the FBI, without any notice, took to Twitter to post the link to over 1,500 pages of documents from their investigation and subsequent findings. 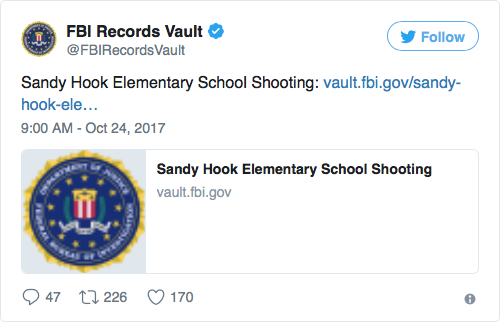 “In general, the FBI does not comment on the content of the files released through [Freedom of Information Act], and lets the information contained in the files speak for itself,” said Charles Grady, a community outreach specialist for the FBI based in New Haven. “This is a routine FOIA release nothing more, nothing less.”

While we would expect that the names, addresses, and contact information be redacted throughout the documents, it appears that entire pages were wiped out.

Just as Americans thought they may be getting some answers as to why this 20-year-old went on a shooting rampage, killing innocent children, it appears we may now have more questions than answers.

One such question that arises from our brief combing of the documents is how Lanza, who only weighed 85 lbs, according to the report, was able to carry such heavy weaponry and ammo and shoot with such deadly accuracy.

According to police, Lanza had in his possession, a Bushmaster XM15 .223 caliber rifle, a Glock 10mm handgun and was also in possession of a loaded 9mm Sig Sauer P226 handgun. After he’d already fired 154 rounds, Lanza also had more ammunition for the weapons he had on his person as well as three 30-round magazines for the Bushmaster, each of them containing 30 rounds.

Lanza was carrying weapons which nearly weighed more than he did.

Also, as the NY Daily News just reported, according to portions of the documents, Lanza was also visited by federal agents before the shooting—who offered him a job.

The FBI documents reveal a visit to the home he shared with his mother by federal agents after he hacked into a government computer.

“The authorities told her that if her son was that smart, he could have a job with them someday,” according to one of the heavily-redacted reports, as reported by the NY Daily News.

As the News reports, Lanza, at that point in the ninth grade, landed on investigator’s radar after hacking his way into an unidentified agency’s computer. The teen made it through two levels of security before his efforts were thwarted, the documents showed.

“Nancy had to convince the authorities that her son was just very intelligent and was challenging himself to see if he could hack (his way in),” the report said of Lanza’s mother.

This revelation about Lanza being visited by federal agents several years before the shooting, leads to so many more questions and opens the floodgates for more conspiracy theories.

Another question on the minds of Americans is why this 20-year-old kid, with no history of violent behavior, would ever do such a thing. Investigators even noted in their reports that Lanza was never violent, but often required special tools to avoid hurting himself by accident.

To this day, Americans are still asking themselves why anyone would do such a thing. Nearly five years later, and we still have no motive and no clear cause as to what made this person snap.

The FBI’s summary of the interview is chilling: “He was singularly focused and obsessed with mass murders … Lanza devoted almost all his internet activity to researching and discussing mass murders and spree killings.”

The Free Thought Project will continue to dig into the heavily redacted documents and we will issue updates as appropriate. 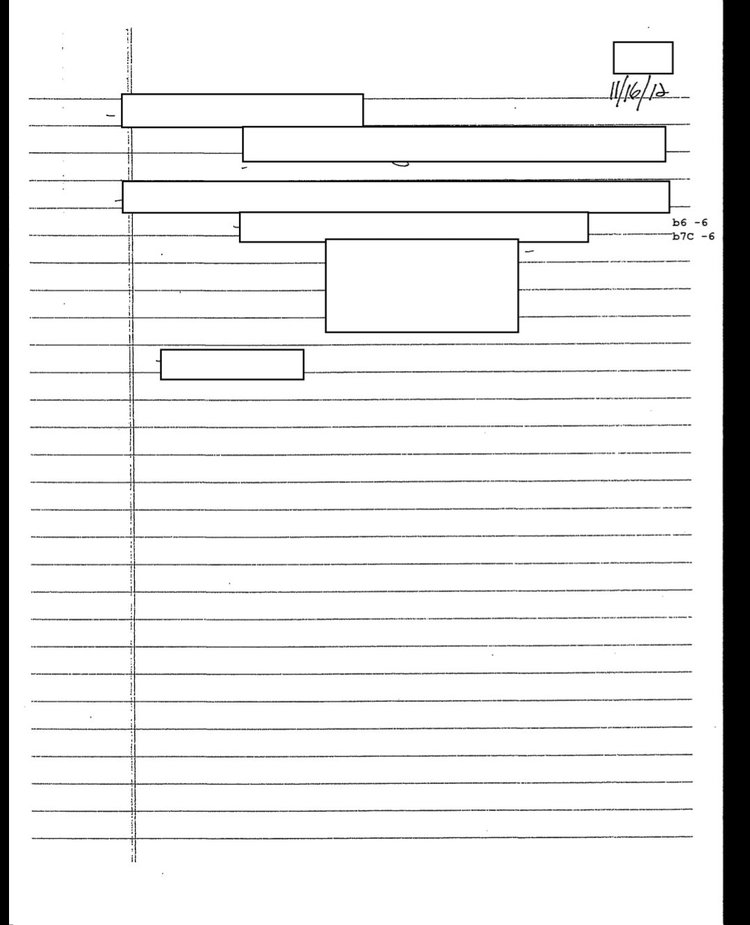 Next Woman Accepts Ticket From Police Then Drives Home, But Later Hears A Knock At Her Door