Teenagers playing”dinging” have killed a passenger. On October 18,  a 2.7 kg rock crashed through the windshield of a van. 32-year-old Kenneth White was one of the van passengers who was traveling along I-75 near Flint, Michigan.

Robert Pickell Genesee County Sheriff said that White has died after he was fatally injured by the rock struck on his face, head and the rock ricocheted to his chest. Before the driver can pull over, he needs to pass four vehicles which were disabled by the rock.

On Monday, the county prosecutor Pickell and David Leyton declared that Kyle Angler 17-year-old, Trevor Grey 15-year-old, Alexander Miller 15-year-old and Mark Sekelsky, 16-year-old are responsible for the terrifying accident. They are charged with one count of second-degree murder each, conspiracy to commit murder, six felony counts each of malicious destruction of property and two other lesser charges. 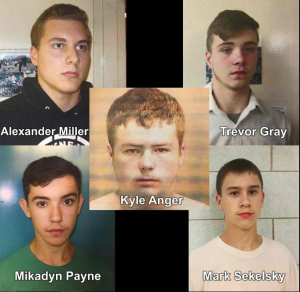 Kyle Angler 17-year-old was the one who threw the rock to White. The offender told the police that they are playing  “dingling” which is a prank where they throw a rock to hear them “ding” on the hit vehicles.  The report stated that they threw a tire and about 20 rocks, one weighing 20 pounds. After they killed White the group went to Mcdonalds to eat.


Robert Pickell country sheriff said:”It’s not a prank. It’s second-degree murder. I don’t think anybody is laughing and I think that if there’s any warning that both David and I can give, is telling young people, you make a bad decision, you could be spending the rest of your life in prison.”

The teenagers remain in custody and if convicted they will face life imprisonment. White has left her fiance and a 5-year-old son. According to ABC 12 White Fiance said: “Because I know that’s what Kenneth would have wanted because he’s a good man. He knows I’m a good-hearted person, and he was a good-hearted person, it’s going to take time, a lot of time. I just hope they realize their actions and how many lives they torn apart, and know that what they did was wrong.”

To support the family of the victim, they have created a fundraising campaign which has raised nearly $60,000.

Next QUESTION: What If 'Whites' Strike Back Against The Race-Baiters and Race-Warmongers?