On October 07, Wesley Mathews adopted daughter Sherin Matthews 3-year-old was reported missing. According to the affidavit, as a punishment for not drinking milk, he sent the little girl outside around 3:00 am on October 07. He told her to stand in a tree 100 feet away from home, across an alleyway.  While waiting for her to return inside he was doing the laundry but after 15 minutes the girl is already gone.

After he told the police that he has seen coyotes in the ally where she told her to stay, he was charged with abandoning or child endangerment. He was released on a bond and was mandated to surrender his passport and wear an electronic monitoring device.

Police said that law enforcement agencies teamed up to search for the missing girl including the FBI, US Marshals and the National Center for Missing and Exploited Children. On October 10,  Sherin’s home and the neighborhood were surrounded with K-9 teams and helicopters.

On Sunday around 11:00 a.m, Sherin Mathews body was discovered in a culvert beneath a road. To confirm the identity of the victim they use dental records. However, the cause of death is not yet determined. 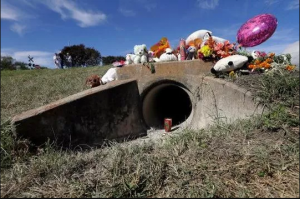 On Monday, Wesley Mathews provided an alternate statement.  According to Dallas News,  Wesley said on the new version of the event that he had been trying to get Sherin to drink her milk in the garage, but she wouldn’t listen. Eventually, the girl began to drink her milk, and Mathews “physically assisted” her, according to an arrest warrant affidavit. Sherin began to choke, her dad told police. He said she was coughing and that her breathing slowed. At some point, Mathews no longer felt a pulse on his daughter and believed her to be dead, according to the arrest warrant affidavit. He admitted to police that he removed her body from the home.

The father of the child was arrested and charged with suspicion of injury and was set to bail $1 million. The first-degree felony charge carries a possible sentence of life or from 5 to 99 years in prison.

Sini Mathews the wife of Wesley Mathews was not charged any crime since she was unaware of what her husband was doing at that time.

But police Sgt. Kevin Perlich said, “We want to make sure everyone understands this is still a continuing investigation, and because of that there are certain dynamics that may change as we go along that may result in additional arrests or modification of charges.”


Previous Check Your Fridge. Here Are 15 Unexpected Items That Shouldn’t Be There (Photos)

Next Dad Sees What Man Did to His Baby Girl, Starts Chopping Off Body Parts