Black racist man horribly attacked two white disabled passengers. On September 24 at around 5:00 p.m on a Q1 bus which was heading for the Shady Grove Metro Station, 27-year-old Marquis Evans-Royster confronted a disabled and homeless man. The offender said while looking at the man’s eyes: “You owe me for making my grandmother a slave.” He also yelled that “All white people are evil,” and that the two white passengers should die. 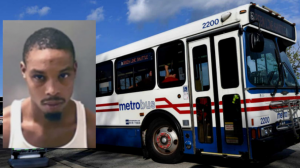 His victim tried to ignore Royster’s racially motived comments, but when he started to get in the man’s pocket some passenger tried to interfere. However, this does not stop Royster’s from spitting the victim’s face and even threatens to drench the man with a bottle of urine. One of the passengers said: “Who carries around a bottle a urine. If I was the judge, I would send him for mental health evaluation.”

Royster finally left the bus when the driver threatened him to call the police,  but when he gets down on the bus he destroyed the side mirror which worth around $250. According to the bus driver’s statement, the offender boarded the bus without paying the fare and harassed the two passengers “almost immediately”.

Marquis Evans-Royster was charged with a slew of crimes, including, race/religious harassment, robbery, theft, second-degree assault, destruction of property and possession of a false I.D. All told, the charges carry a combined maximum penalty of more than 30 years in prison. After four days, Royster was caught by the police at Wheaton Metro Station.


The court documents show that  Royster is living with her sister at 13900 blocks of Castle Boulevard in Silver Spring. He works as a tow driver with two children and holds an extensive criminal record.

Investigator collected surveillance video from the Q1 bus, this will be used as an evidence. According to 70-year-old Tyrone Kenney, a black man who grew up during the Civil Rights Era criticized the incident.