In general, integrity is defined as being honest with strong morals. Every company has set standard rules and it includes integrity, but how does an 84-year-old employee break this rule. 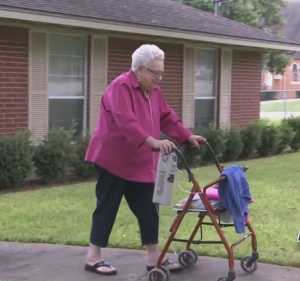 Frankie Ruffino 84-year-old  from Burton has been an employee of Walmart for a decade. She was as a greeter but was move to phone operator as her health decline. Her long years of service in the company was ended after she saw a $1 bill.

On Tuesday at Walmart Brenham, while leaving the Walmart she found a $1 bill on the ground in one of the aisles. Frankie picked it up and place it on her walker, she rides in her car and went home. The manager called her in the next day. Her manager asked if she found money in the store, she pulled the money from her wallet and give it to her manager.

Unsatisfied of what she got, she ordered Frankie to surrender her badge and uniform because she already fired because of an integrity issue. The 84-year-old  was devastated by her manager’s decision since she relies on her salary to pay her medication and she was disappointed because at her age her integrity is still questioned.

Because of the heartless decision of the manager, Walmart is being criticized by the public. Here are some comments:

“I will celebrate when the retail apocalypse finally takes out Wally World. Couldn’t happen to a worse company.”

“WALMART IS AN EVIL COMPANY WHO SCREWS OVER PEOPLE USES OLD OLD PEOPLE AND PEOPLE WITH HANDICAPS, PAY THEM SHIT WAGES AND KEEPS PEOPLE ON FOOD STAMPS THAT GO BACK TO THEM SO THE WALTON FAMILY CAN GET RICHER AND RICHER AND THEY DESTROY BUSINESS’S IN TOWNS ALL THE TIME I HATE THEM.”
“I feel sorry for this elderly woman but I am still trying to wrap my head around why she thought it would be okay to take money that doesn’t belong to her. Even a dollar if it’s not yours you don’t take it. On another note an 84 year old should not have to work to pay for lifesaving medication. Hopefully she will get the social services help she needs so that she won’t have to work to pay for any medication.”
Article Source: NYPost Photo Source: Longroom and KBTX