Video is at the bottom with a report from St. Louis Fox affiliate about his connection to St. Louis, Mo

Here’s a photo of him being taken into custody: 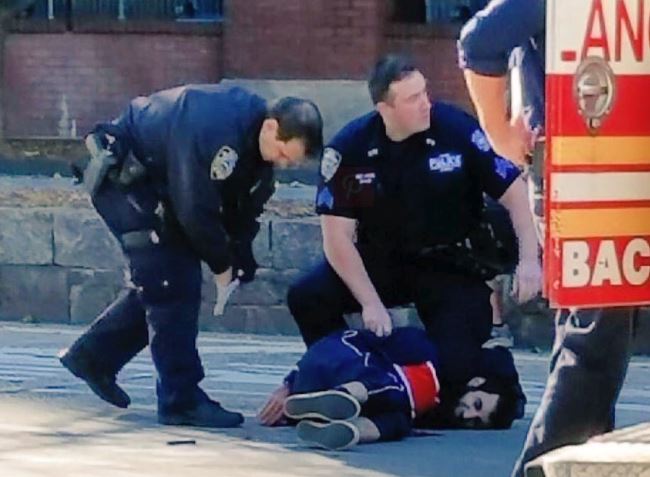 Saipovm is an Uzbek national who came to the US in 2010, according to NBC. As Gov. Cuomo said during a press conference Tuesday evening, Saipovm is believed to have acted alone and there’s no evidence of a wider plot. 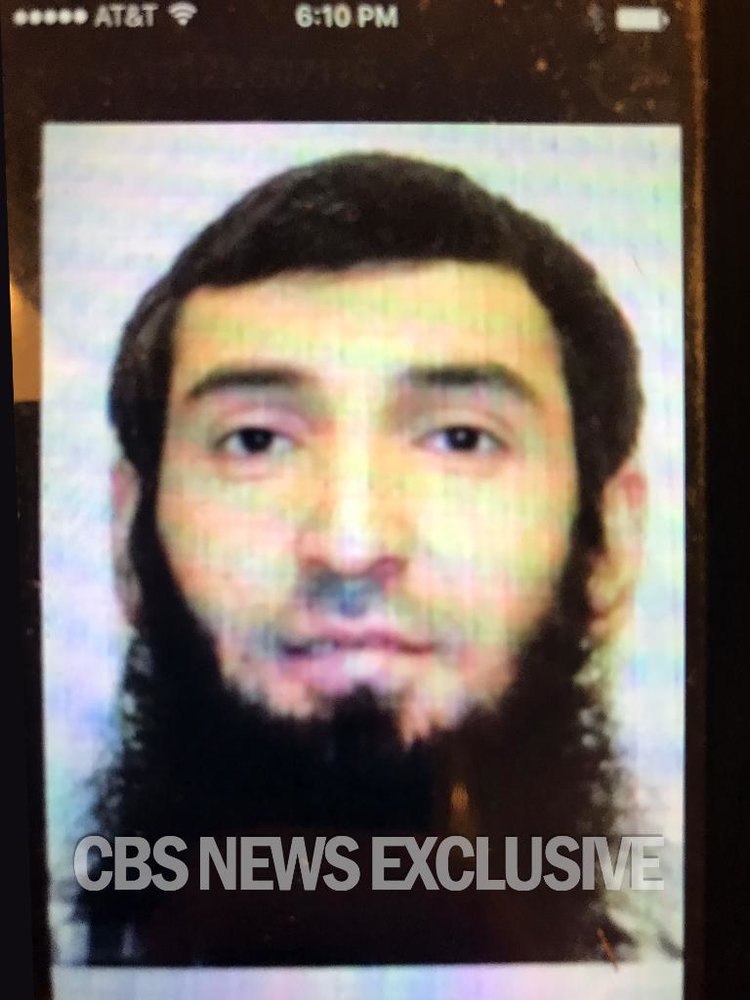 Here is more on this guy from The Heavy:

Sayfullo Saipov, an Uzbek national who drove for Uber, was identified in news reports as the suspect accused of ramming a Home Depot rental truck into people on a bike path in lower Manhattan, killing at least eight and injuring multiple more, in a frightening “act of terror” that unfolded in the shadow of the World Trade Center memorial.

ABC News and other media outlets named the suspect as Sayfullo Saipov, who had identification from Tampa, Florida but was more recently living in New Jersey. According to CBS News, the terror suspect is “Sayfullo Habibullaevic Saipov, apparently from Uzbekistan.” He is an Uzbek national who has been in the United States for seven years, according to NBC and CNN. Online records show he worked as a commercial truck driver and had ties to Ohio as well. According to the New York Post, a friend described Saipov as a “friendly Uber driver.” Although in the country since 2010, possibly on a green card, Saipov had contact with law enforcement in many states for minor traffic violations, showing a mobile life.

New York police and other authorities declined to release the 29-year-old suspect’s name in an early evening press conference after the Halloween afternoon attack, but the mayor publicly and quickly called the car ramming an “act of terror,” and his identity quickly leaked. CNN is reporting that sources say Saipov is not a U.S. citizen. 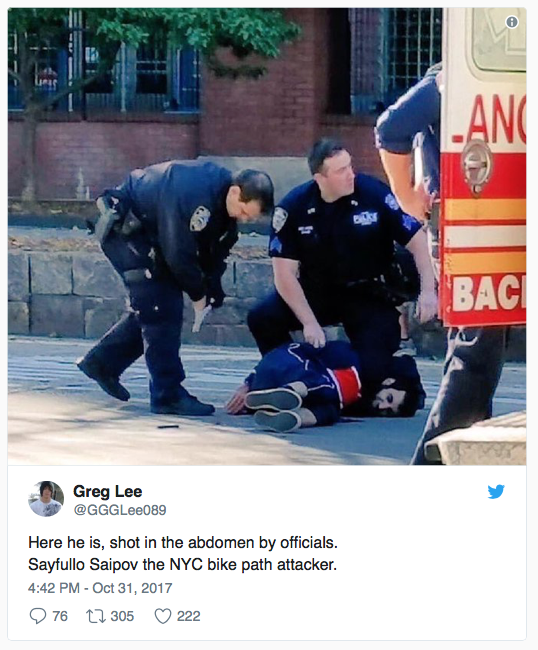 The suspect was shot by a New York police officer in the abdomen after leaping from the truck with paintball and pellet guns while shouting “Allahu Akbar,” and is in custody, New York’s top officials confirmed in the press conference. According to CNN, the FBI has taken over responsibility for the investigation and is considering the attack to be terrorism. It was the city’s deadliest terrorist attack since September 11, 2001.

“It looked intentional,” an eyewitness confirmed to CNN, describing the truck hurtling through the busy bike lane, leaving behind crumpled bicycles and bodies with tire trucks visible on them. Pedestrians and bicyclists can see the World Trade Center memorial area as they traverse the popular, and usually peaceful, area where the attack occurred. It’s literally adjacent to the scene where the United States’ worst terrorist attack occurred. Again and again, in their initial comments, New York officials focused on horrific spectacle of average people just going about their lives, enjoying a beautiful fall day, before being struck down so randomly. Whether the suspect had any ties to ISIS is not yet clear.

“The truth is, New York is an international symbol of freedom and Democracy,” New York Governor Andrew Cuomo said in the press conference, describing the suspect as a likely “lone wolf.” He added, “That also makes us a target from those people who oppose those concepts… We go forward together, and we go forward stronger than ever. We’re not going to let them win.” Be forewarned that some of the videos and photos below are graphic.

Eight people are dead in a terror attack in New York. One of the dead is from Belgium and five others were from Argentina.

The driver, who plowed into a crowd, had been arrested two years ago in St. Charles, Missouri.

A spokesman at the Missouri Highway Patrol said troopers did book a man by the name Safullo Saipov into the St. Charles County Jail. According to authorities, he broke the law back on December 16, 2015 in Platte County, Missouri. The 29-year-old truck driver was ticketed at scale by highway patrol troopers for failing to maintain the brake system.

They released a mug shot of Sayfullo Saipov.

In April 2016, Saipov failed to show up in court for that ticket and a warrant was issued.  Bond was set at $200 cash. According to unofficial court records, Saipov was stopped October 21, 2016 in St. Charles County on that warrant. A new court date was scheduled for November.

Saipov failed to appear and finally, on November 29, a guilty plea was entered. The court decided Saipov would pay $129.50 for the ticket for bad brakes and $70.50 for court cost. In affect he lost all the $200 bond.

On October 31, Saipov drove down a busy bicycle path in New York near the World Trade Center, killing eight people and injuring about a dozen others in what officials said was an “act of terror.”

After crashing the truck into a school bus, the suspect exited the vehicle while displaying imitation firearms and was shot in the abdomen by a police officer, according to the NYPD.

Saipov is in police custody and was taken to a hospital for treatment, officials said.

The incident is being investigated as terrorism, officials said. Witnesses reported the suspect was yelling “Allahu Akbar,” according to four law enforcement sources. The FBI’s Joint Terrorism Task Force is taking over the lead of the investigation.

Authorities found a note in the truck Sayfullo Saipov allegedly used in the New York terror attack claiming he did it in the name of ISIS, a senior law enforcement official told CNN. The note was in English, the source said.

“This was an act of terror, and a particularly cowardly act of terror,” New York Mayor Bill de Blasio said, “aimed at innocent civilians, aimed at people going about their lives who had no idea what was about to hit them.”

Here are the latest developments in the attack:

• The suspect in the New York attack is from the central Asian nation of Uzbekistan and came to the United States in 2010, two law enforcement sources told CNN. A Tampa, Florida, address is connected to him. Investigators are also looking into a possible connection to New Jersey, the sources said.

• The man rented the truck in New Jersey on Tuesday, a person briefed on the investigation told CNN.

• President Donald Trump tweeted that the incident “looks like another attack by a very sick and deranged person.” In a later tweet, he wrote, “My thoughts, condolences and prayers to the victims and families of the New York City terrorist attack. God and your country are with you!”

• A Belgian national was a victim of the attack, Didier Reynders, Deputy Prime Minister and Foreign Affairs Minister for Belgium, said on Twitter. “I am deeply saddened to announce a Belgian victim in Manhattan – I express my condolences to the family and friends,” he tweeted from his verified account.

• New York Gov. Andrew Cuomo directed One World Trade Center to be lit in red, white and blue in honor of freedom and democracy, his office said.

Authorities think it is an act of terror because the driver said something moments after leaving the truck and the method of the attack were consistent with other terrorist attacks, New York Police Commissioner James P. O’Neill said. Vehicles have been used as weapons in a number of terrorist attacks in recent years, including in deadly incidents in Nice, France, and London.

The suspect, driving in a Home Depot rental truck, hopped a curb at West Houston Street and drove south on the bike path on the west side of West Side Highway in Lower Manhattan for several blocks, officials said. A pellet gun and a paintball gun were recovered from the scene, officials said.

Just after the incident, news footage showed several mangled bicycles on the popular bike path as medics tended to the wounded in the background.

Six people were declared dead at the scene and two were pronounced dead at the hospital. At lease 11 others were transported to the hospital with serious but non-life-threatening injuries, according to New York Fire Commissioner Daniel Nigro.

No other suspects are being sought, the NYPD said.

A spokesman for Home Depot confirmed one of the company’s rental trucks was part of an incident in lower Manhattan and said the company is “cooperating with authorities” in the investigation.

News footage showed crowds of spectators — some capturing the scene with cellphone cameras — gathered behind police lines. A white Home Depot truck with the front end smashed was also visible.

Eugene Duffy said he had just left work at Pier 26 and was waiting on the light to cross West Street when he heard a scream. He thought it might have been a Halloween prank but he said the scream was bloodcurdling.

“I look down and I see a white pickup truck a couple of more blocks down in the bike path,” he said. “Automatically, I know something’s wrong. Then, as I go down more toward where the girl is screaming, I see two gentlemen laying there and they have tire tracks marked across their bodies. You could tell they both weren’t here.”

He continued to walk closer to the scene. Gunshots rang out. He saw cops ducking for cover. A yellow school bus was smashed nearby. Cops descended on the area.

“I thought automatically, this area, I thought it was terrorism,” he said.

Michael Corbin, the assistant real estate manager for District Council 37, the city’s largest public employees union, was standing outside the union’s lower Manhattan offices attending to a woman who slipped and fell on the sidewalk.

“The first responder to the event was a counterterrorism officer,” he said. “We were attending to the victim, getting her onto a stretcher and, at that moment, we heard gunshots. I recalled hearing five gunshots in quick succession and immediately the officer … left to investigate the situation from the direction we heard the noise coming from.”

Another witness, Ramon Cruz, described what he saw.

“What I saw was that the driver — he didn’t look like he was bleeding,” said Cruz. “He was dragging his foot. He looks frustrated, panicked, confused. People are running past me, saying, ‘He’s got a gun. He’s got a gun.’ I didn’t see any gun.

“It was a white pickup truck. He looked pretty bad without bleeding or anything like that. I didn’t see him hit anybody. All I heard was the impact of a crash.”

Tuesday afternoon on Twitter, a user posted an image of a person lying on the ground near the scene of an incident near West & Chambers Streets in Manhattan.

Authorities are sure to look at whether the suspect visited Uzbekistan since he moved to the United States seven years ago, CNN terrorism analyst Paul Cruickshank said.

“There has been a significant problem with jihadism in Uzbekistan,” he said.

According to Cruickshank there are two large jihadi groups in the country. One of them is the Islamic Movement of Uzbekistan, which is affiliated with ISIS.

In April, an Uzbek man was arrested after a truck attack killed four people in Stockholm.