Scientists have announced the shocking discovery in Germany of ancient teeth fossils that are nearly 10 million years old, which they say confused our established timeline of human history.

While the previous unearthed fossil evidence showed “great apes were roaming Europe millions of years ago, the teeth found in Germany bear a striking resemblance to the teeth of “Lucy,” a skeleton of a species closely related to humans found decades earlier in Africa that’s been estimated to be only 3.2 million years old. 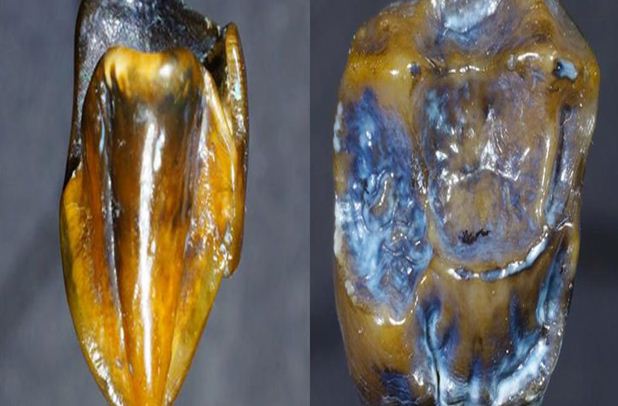 “This is not only the first time something like this has been found here in over 80 years, but it’s something completely new, something previously unknown to science,” paleontologist Herbert Lutz from the Mainz Natural History Museum in Germany said.

The two well-preserved teeth dated to about 9.7 million years ago was discovered near the German town of Eppelsheim in September 2016.


The thing is, Lucy is estimated to only be a little over 3 million years old, and humanity’s early ancestors are only thought to have begun their migration out of Africa and into Europe and Asia some 100,000 years ago.

So, who did these teeth out of time and space belong to, and how in the name of human history did they get there?

“We’ve got two teeth from a single individual. That means there must have been a whole population,” Lutz said.

“It wouldn’t have been just one, all alone like Robinson Crusoe… if we’re finding primate species all around the Mediterranean area, why not any like this? It’s a complete mystery where this individual came from, and why nobody’s ever found a tooth like this somewhere before.”

The latest find in Germany has put a giant wrench in that consensus. As far as traditional evolutionary science is concerned, if these teeth really are related to modern humans, and if they really are as old as they appear, they were found in completely the wrong place.

Mainz Mayor Michael Ebling reportedly said during a joint news conference, “I don’t want to over-dramatize it, but I would hypothesize that we shall have to start rewriting the history of mankind after today.”

University of Toronto paleoanthropologist Bence Viola wrote in an email to National Geographic, “I think this is much ado about nothing,” arguing that the teeth found in Germany may not even be teeth of humans’ extinct relatives.

Moreover, National Geographic confirmed that “most experts we contacted say that the molar probably belongs to a species of pliopithecoid, an extinct, primitive branch of primates that lived in Europe and Asia between roughly seven and 17 million years ago.”