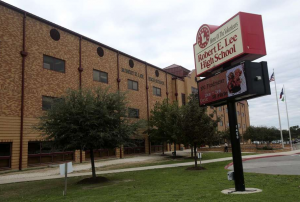 The new name of San Antonio high school is Legacy of Education Excellence High School or L.E.E High School. This is not too far from its previous name. The change will take effect next fall.

The school looked to make an adjustment in an effort to follow the trend that other schools and towns are making to clean break from the Confederate general.

According to San Antonio Express-News, the school board has received 2,443 submissions for the new name in just a week last September, but that many contained offensive or inappropriate references.


For those wanting to remove all association was disappointed with the new name of the school. However, for Shannon Grona School board president it was perfect compromise: “We can honor the legacy of the past. It is my hope that changing the name to Legacy of Educational Excellence will minimize the financial burden and help the community heal.”

One of the trustees who voted to rename the school, Edd White said: “I just think that we’re trying to put lipstick on a pig if you’re gonna still have the acronym LEE.”

Everyone has plenty to say about the new name of the school, including one person who did not agree to change the name of the school: “You people are ignorant to allow this to happen. Anyone who doesn’t like it can go somewhere else. Who the hell made these people so important and allow them to change everything to suit them. Who the F cares what they want.”

One of the alumni also commented: “I graduated from Robert E Lee High School in Midland Texas. If they charge the name, they are a bunch of cowards. Someone has to stand up to these F*** B*** P***!”

Then another person concluded: “Then no school should be named after anyone. Use just the name of the town, small town. Elementary, sm town middle, sm town high.”