Parents in Oklahoma were proven guilty in a case described by the police as “the worst case of child abuse they had seen,” when a recommendation from the jury that they both serve 130 years in prison. 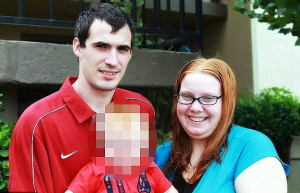 According to Tulsa World, Aislyn Miller, 24, and Kevin Fowler, 25, were convicted Friday on five counts of child neglect related to allegations that they allowed their children to live in filthy conditions and starve to the point where 9-month-old twin girls each weighed roughly 8 pounds when they started receiving proper care.

A Tulsa County jury recommended that Miller and Fowler serve 30 years on the first four counts and 10 years on the fifth. The couple is set for sentencing before Judge William Musseman on Nov. 13.

In December 2016, it was reported that a mother and father were arrested after their twins babies were found malnourish who look like skeletons and suffering from a horrible infection.  Local urgent care called Police in Owasso, Oklahoma to make an investigation regarding reports of child abuse.


Nurses were working on the twins when the police arrive to investigate. According to the healthcare provider, a maggot is found crawling out of one the infant’s genitals. The other infant has feces on the ears and both of them look like skeletons.

When the infants were taken to the hospital, the girls weighed roughly 8 pounds. Their weight is said to be inappropriate for a 9 months old child.  Aside from the fact that the babies were starved, they also have bed sores and severe diaper rash.

To defend herself Miller told the police that the poor health of their children is a result be being new parents who have no experience of taking care of babies.

People have posted different reaction towards the news on social media.

“They both need to be put down! when a dog attacks a human they’re put down but when a human abuses another human they live off of taxpayers hard working money! These people should not be existing!”

“I wish these nasty disgusting foul maggots would stop having children only to mistreat them. I see ole fat girl don’t like skeleton . This is so sad.”


Previous Check Out How Much Money The Traitor Bergdahl IS Eligible To Collect... Potentially Hundreds of Thousands

Next He Squatted At Home Of Soldier Serving Overseas, Here’s What A Group Of Bikers Did