Charles Manson was rushed out of prison to a California hospital, where he’s clinging to life, according to reports Wednesday night.

The 83-year-old Manson normally makes his home inside the walls of Corcoran State Prison but he was taken to a Bakersfield hospital earlier this week, sources told TMZ.

He’s surrounded by five uniformed officers as he’s wheeled on a gurney from treatment to treatment, the celebrity website reported.

“It’s not going to get any better for him,” a source said. “It’s just a matter of time (until he finally dies).”

A rep for the state Department of Corrections declined comment.

Witnesses told KGET, an NBC affiliate in Bakersfield, that Manson was spotted at Mercy Hospital in downtown Bakersfield.

Here are some of the strange

“ATWA can only be redeemed by a world mind changing of lifestyles. I could explain but I’m always being cut off by people like R.D. & others who want to be me. They want to be Stars or leaders. They spend lifetimes learning how to get votes & how to be someone for jobs and power plays that do nothing but make movies or play act some game that makes money & in the inner circle of that, they don’t care for trees & don’t see life – only $ money.”

“It took 360 million years for the SUN to orbit, and five times that long to build a man from the real powers of a million suns in forever. If your mind’s brain is free and real, that’s about two weeks in Manson time.”

“Time is far out – like I got forever but only a little time on Earth with it. When I’m gone that’s it – I could of left a lot behind but no one cared & God [holds] that judgement.”

“Beyond the living & the Dead is where I say what I said – Right On in my Hallways of all ways.”

‘She really doesn’t know anything at all.’

Afton, 29, who changed her named to Star a decade ago, crossed the country at the age of 18, leaving her home on the Mississippi river and moving to Corcoran. 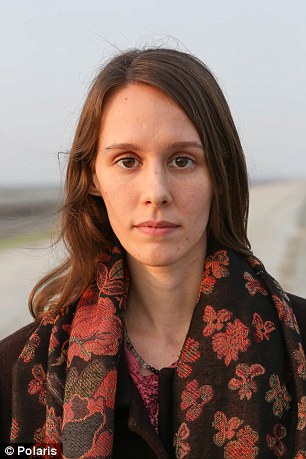 In 2014, ‘Star’ announced her engagement to the notorious serial killer and cult leader

She struck up a relationship with Manson when she started writing to him after a friend chose him as the subject of a school project.

It is almost three years since father-of-four, Phil, received the telephone call from his eldest child, announcing: ‘Daddy I’m going to marry Charlie.’

Since then a marriage license has been issued but expired in February 2015 amid lurid reports that Afton had only wanted to marry Manson so that she could take possession of his corpse on his death and use it for profit – charging people a fee to view it.

Both her mother, Melissa, 50, and her father strongly refuted the claims and now Phil gives a rather more prosaic cause for the end of the relationship and the couple’s failure to wed.

He explained: ‘There were several complications that arose regarding the scheduling [of the marriage]. There was a lot of time that he was unavailable because he was in solitary confinement.

‘The rumors are that they [the prison authorities] were trying to make it difficult for them. There’s no visitation, no phone calls, no nothing when you’re in solitary.’

Under such pressures the relationship was, he said, impossible to sustain.