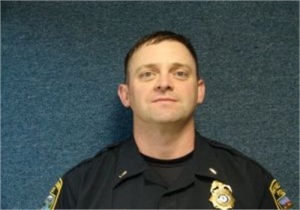 CHARLOTTESVILLE, Va. (WRIC) –According to federal court documents, four people have been charged with murder in the death investigation of Capt. Kevin Quick.

“That is a penalty up to the death sentence in this case that is available for that offense.”

Those indicted are all members of a subset of the Bloods street gang known as the 99 Goon Syndicate.

The indictment spells out how members of the gang allegedly carjacked and kidnapped Quick and then drove around to various banks, attempting to withdraw cash from his accounts before murdering him and dumping his body in Goochland County.

The gang is also charged with numerous robberies, shootings and assaults taking place across Central Virginia as well as drug and weapons charges.

Earlier this year in Virginia,Waynesboro police officer Kevin Quick was kidnapped and murdered by four black gang members with affiliation to a national gang from Los Angeles. Quick was driven from ATM to ATM where he was made to withdraw money, then driven into the woods where he was executed as a way for the murderers to move up in the gang.

Nowhere in the national media was this murder of a police officer put to paper. But when a white police officer shot a black man named Michael Brown in Missouri, it made the national news for months. What hypocrites the media has become. Where is the outrage for Quick? Where are the beserk protesters burning and looting in the name of officer Quick?

Where is Eric Holder in his indignant huff? I’ll tell you where he is — he’s sitting on his hands, choosing not to speak up about the tragic death of the officer and the cold-calculating killers. Could the fact that they are black play any part in Holder’s decision?

We all know Holder is not a racist. Just listen to him speak. Even Barack Obama couldn’t stand up and say it could have been him this time. He would never be a cop; however, he would be an enabler for the criminal element.


Previous Trump Has Ended Welfare For HUGE Section Of The Population... Let The Protests Begin!

Next After Being Charged With Violating A Students Safety, Music Teacher Threatened To Kill Himself [VIDEO]