On almost a daily basis, liberals show us just how vile and disgusting their souls truly are. While we’ve gotten used to their antics since Trump got in office, one black congressman’s vitriolic comments about Kellyanne Conway were so disturbing, he needs to be forcibly removed from office immediately.

Several days ago, President Trump held a special event at the White House where he brought together over 60 African-American professors from around the nation. While the meeting should’ve been a unifying moment for Republicans and Democrats, liberals immediately began to pick apart the event by focusing their attention on Conway who was sitting on her knees on the Oval Office couch so she could gain the height that was necessary to take pictures of Trump and the group, but still not get in the away of the camera crew behind her.

Shortly after the picture of Conway began to circulate on social media, liberals went nuts, even stooping so low as to call Conway a “slut.” But then Democratic Rep. Cedric Richmond took the disgusting rhetoric to a whole new level, making an absolutely vile accusation about Trump’s right-hand aide. 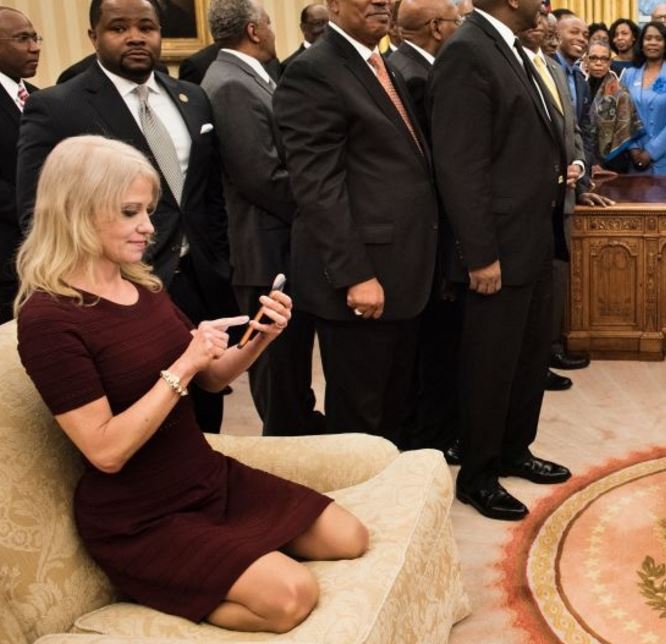 Richmond said that Conway looked “familiar” with being on her knees, alluding that the only reason she got her job at the White House was from giving “special favors” to Trump. What was even more horrifying is that Richmond didn’t confine his jokes to just a small circle of people, but his remarks were made during a public forum during the Washington Press Club Foundation dinner.


“You even mentioned Kellyanne and that picture on that sofa,” Rep. Richmond said during his speech to Republican Sen. Tim Scott who has at the event. “I really want to know what was going on there because she really looked kind of familiar in that position there, but don’t answer.”

Richmond’s comments are not only disgusting and vile, but proves yet again that the REAL “war on women” is not being perpetrated from anyone on the Right, but those on the Left who constantly tear down conservative women simply because their political views do not align with theirs. Could you imagine if a white man made a comment like this about Michelle Obama? The incident would be front page news all across every liberal rag in America!

For years democrats have been the party of sexual harassment, its nothing new and we are seeing new cases daily

One former female employee filed a complaint with the Congressional Office Of Compliance in 2014, alleging that she was fired for rebuffing Conyers’ sexual advances. It was that employee who eventually received a $27,111.75 settlement in 2015, in exchange for a confidentiality agreement. The congressman did not admit to fault as part of the settlement agreement.

“In her complaint, the former employee said Conyers repeatedly asked her for sexual favors and often asked her to join him in a hotel room. On one occasion, she alleges that Conyers asked her to work out of his room for the evening, but when she arrived the congressman started talking about his sexual desires,” BuzzFeed reported. “She alleged he then told her she needed to ‘touch it,’ in reference to his penis, or find him a woman who would meet his sexual demands.”

Conyers regularly made sexual advances on female staffers and would ask them for sexual favors, according to the affidavits signed by his former staffers. “Rep. Conyers strongly postulated that the performing of personal service or favors would be looked upon favorably and lead to salary increases or promotions,” one former employee said in an affidavit.

He also allegedly abused taxpayer funds to shuttle in women with whom he had sexual relationships.

“One of my duties while working for Rep. Conyers was to keep a list of women that I assumed he was having affairs with and call them at his request and, if necessary, have them flown in using Congressional resources,” one affidavit states. Another staffer told BuzzFeed that Conyers, who is the longest-serving congressman, used taxpayer funds to fly women into see him.

This latest bombshell comes just mere days after we exposed how the Congressional Office Of Compliance spent a startling $17 million dollars of taxpayer money to cover their rape crimes by buying off the victims.

A brave congresswoman has blown the whistle on how tens of millions of dollars in taxpayer funds has gone towards silencing victims of rape by high-level government officials.

Rep. Jackie Speier told MSNBC that the U.S. House of Representatives alone has spent at least $15 million to settle sexual misconduct lawsuits in the last decade.

Thefreethoughtproject.com reports: “We really need to reform the entire Office of Compliance process,” Speier said. “Right now it takes about 90 days for you to file a complaint, and before actually going through the mediation, you have to sign a non-disclosure agreement and then you are not represented by counsel, but the harasser is represented by the House of Representatives general counsel.”

In many cases, as was seen with Harvey Weinstein, when ultra-rich and powerful individuals are accused of sexual assault, they respond by paying large sums of money to their victims, in exchange for an iron-clad, non-disclosure agreement.

It’s high time that liberals are held accountable for their crimes. It’s absolutely insane how Bill the Rapist and these other leftist predators have managed to stick their man parts in whoever they wanted over the years, all while the left wants to continue to invent fake sex scandals about Republicans right before an election is held.


Previous The MASSIVE Whitehouse Leaking Mole Has Been FOUND, Check Out who It Is!