When a woman noticed a weird bump on her foot, she tried to ignore it. It first started appearing when she was just 15 and Cheryl Murray didn’t think anything about it. But as she got older, the growth increased in size until it was as big as a golf ball – now imagine putting a golf ball and your foot inside of a shoe. Impossible.

In 2014, Cheryl finally had a boyfriend, David, who asked her about her foot. She lied about what it was and he knew it wasn’t the truth. So David told her that she really needed to get the lump on her foot checked out.

When she did, she got the biggest surprise of her life. After ignoring the growth for more than a decade, she left that office with one leg missing. Read on…

“David asked me what was wrong with my foot. I replied that it was torn ligaments, but he could tell it wasn’t, that it was more serious,” Murray told the Mail.

Doctors took her growth seriously. They conducted a number of tests and found out the worst. Cheryl had a rare form of cancer called sarcoma. “I never thought it would be anything serious. I was hysterical. I was so stunned I couldn’t speak,” she said.

But that was only the beginning of the bad news. 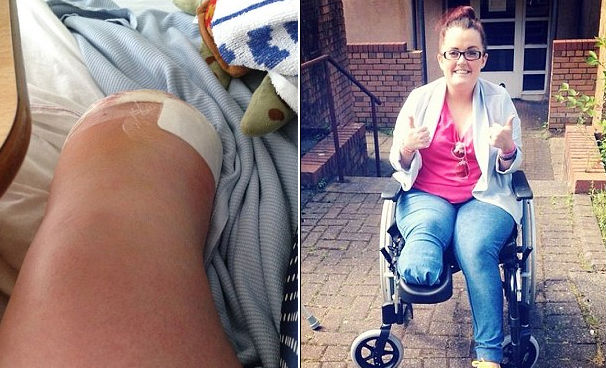 The doctor then told her the cancer had advanced so far that she would need to get her leg amputated. “I felt like I had been punched in the face twice on one day,” Murray continued.

“I was sobbing for what felt like forever, but David reassured me that we would get through it,” she added.

David was a good man who supported the 27-year-old cancer victim throughout the ordeal. Not long before her operation, David proposed marriage – he wanted her to know he loved her and that he was going to be there for her – no matter what.

“I tell him daily that I can’t imagine what I would have done without him. Knowing I wanted to build a life with him kept me going,” Murray said.

After the operation, Murray was wheeled out in a wheelchair. But she didn’t want to wait or be a victim anymore. She immediately began physiotherapy and was fitted for a prosthetic limb.

“I’ve thought a lot about whether if I’d have gone back to the doctors sooner it could have saved my leg,” Murray told the Mail.


Previous Top 10 Professions Women Are Most Likely To Be Unfaithful