Silly Protesters, streets are for trucks! This one ends with a twist, though…

This one has more controversy than I thought after first glance.

A group of Nevada protesters took to the streets to protest Columbus Day. Something about Columbus was racist or something along those lines.

Evidently, we are all racist, right?

According to one version of the story, a white kid in a Nissan truck was surrounded by these Columbus Day protesters, threatened, and then he decided to gun the engine and plow over a few of them in an effort to escape.

If the kid ends up in court, he should definitely claim the entire event was in self-defense.

The protesters, on the other hand, tell a different story.

According to other accounts, on Facebook, there is more to the story.

One commenter says that the driver, along with his passenger, started at the protest origin point and yelled slurs at the protesters. They then doubled back to a point where the protesters would be blocking them, where they could easily run them over.

Other Facebook commenters have said things like, “The protest, I agree with. Standing in the street, I don’t. I have been to many protests, and I never block the road.”

Here is what happened to one protester who was struck: 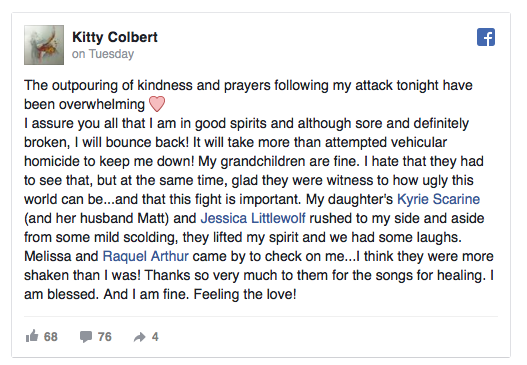 We would not want this woman, or anyone else, to get hurt, but STAY OUT OF THE ROAD!

Black Lives Matter has been run over enough times that protesters of any variety should know better. Americans have the right to protest, but not the right to block the road.

Was the kid driving an antagonist? Was he at fault? Perhaps, will witness testimony, it could be argued.

The truth still remains, though, these people were in the streets. I suppose the judge will decide.

The white kid driving the pickup did this with the fullest intention of inciting someone to make the mistake of approaching him, instead of staying in formation and holding the line.

Other videos, easily available, show him calmly sitting in his pickup and asking people if they want him to run over their relatives. This of course inflamed the situation and caused march participants to become heated. He knew exactly what he was doing – he was race baiting and we got sucked in.

A lot of you don’t understand why we would block the street. The reason we block the street, among other things, is that you refuse to acknowledge our grievances as fellow human beings. You have been corrupted by an endemic sickness in our society to believe that our issues do not concern you and that you don’t have time to listen to our resentment and outrage over the treatment of our fellows, because you have to be at work or the ball game or whatever else trite entertainment has been placed in your path to distract your attention from the world around you.

We can’t stay safe and remain on the sidewalk with you if anything is going to change.

Continuing to ignore these things or make condescending remarks about North America being first settled by Northern Europeans, or complain about us being in the streets, will do nothing to improve our situation. I say our situation because whether you can recognize it or not, it is OUR situation. The fact that you are blind to it changes nothing. While you are being distracted by the spectacle of our distress, you are being absorbed by the pathogenic system in which we live – you are the frog in the pot of water coming slowly to a boil.

Everyone has their own point of view. Watch the video below for yourself and decide what you think.