The image was posted online by artist Newlin Tillotson, who later turned her Instagram account private. On Stewart’s own Instagram account, she posted a less controversial version of the photo, giving peace signs to both of the portraits, according to The Hill.

Kevin Sharkey, who took the second photo, is reported to work as an executive with Stewart’s company. He posted the version of the photo that he called “politically correct,” saying that it was a “so much less interesting” version of another.

Stewart and Trump have had a strained relationship after a feud over Stewart’s spinoff of Trump’s show “The Apprentice,” which ran for just one season. Stewart did congratulate Trump on his victory over Democrat Hillary Clinton after the 2016 presidential election.

Stewart and Snoop Dogg co-star in VH1’s “Martha & Snoop’s Potluck Dinner Party,” and have had a friendship that dates back to 2008, when the rapper appeared on Stewart’s talk show, “Martha,” according to Vulture. 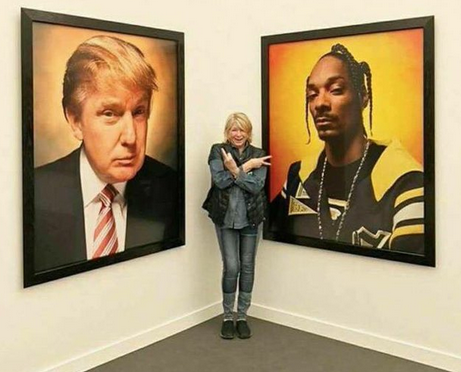 In the pair’s VH1 show, they host celebrities in a “half-baked evening of cocktails, cooking, conversation, and fun where nothing is off-limits.”

Snoop Dogg has previously come under fire in March for a controversial video featuring a parody of Trump. In the video for BADBADNOTGOOD’s “Lavender,” the rapper points a prop gun at a clown version of Trump, Billboard reports.

Even Trump himself weighed in on the video on Twitter.

“Can you imagine what the outcry would be if Snoop Dogg, failing career and all, had aimed and fired the gun at President Obama?” the president tweeted. “Jail time!”

Other artists in the rap and hip-hop scenes came to Snoop’s defense, such as Ice-T and Treach, who expressed their support for Snoop Dogg in a joint interview.

“And it was a confetti gun,” said Treach. “Anybody got shot, confetti came out. It was artistic.”

“I don’t think it was threatening neither,” he added.

“He’s messing with the line,” he continued. “We’ll see how this weighs out, but I roll with Snoop. I thought it was a good video.”