One family’s Christmas card photo is stirring up quite a bit of controversy this holiday season. 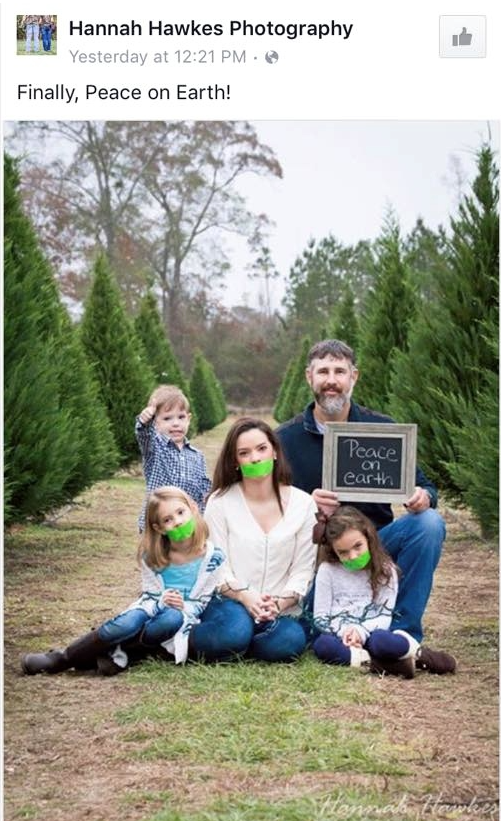 A family’s holiday portrait was shared to Facebook by Louisiana-based Hannah Hawkes Photography on Dec. 13, The Daily Dot reports.

The photo shows a family sitting outside in between rows of evergreen trees. The mother and two daughters are in front with their mouths duct-taped shut and their arms tied with Christmas lights, while the father sits behind them, holding up a sign that reads, “Peace on Earth,” and the son stands next to him, giving a thumbs up.

After the photo went viral and caused outrage, Facebook removed the photo — and Hawkes’ fan page.

Hawkes relaunched her Facebook page after it was taken down and responded to the controversy:

After being silent, now isn’t that ironic, I would like to speak! I have been called every name in the book, and have received some very hateful and vulgar comments and messages. I would like to say that as a female I do NOT and have never promoted violence to women! I do not support abuse, or the degradation of women. My controversial photo was taken by request by the family, and was in no way meant to promote abuse. This photo was taken with humor in mind, and was meant as a comical Christmas photo. I personally know this family, and have known them for many years. They are not abusive to their children in any shape or form. Also, I would like to add that no one was harmed during the process! So everyone have a very MERRY CHRISTMAS and MAY GOD BLESS you and yours!

Next Humiliated, Now She Tests The Mirror Every Time She Uses A Public Bathroom