George Soros won’t go away until Attorney General finally ensnares him under the RICO statute as a participant in the Democrats’ criminal syndicate.  Until that time comes expect more of these kinds of stories.

Soros is funding a massive effort to register convicted felons in Alabama in an effort to derail conservative Roy Moore’s U.S. Senate bid and install another far-left pawn instead.

The half-brother of the infamous, race-baiting, flamethrower, Rev. Al Sharpton, is spearheading the effort.  Sharpton’s kin, Pastor Kenneth Glasgow, who has established his own reputation as a radical leftist, is leading the effort to get as many felons as possible registered before this past Monday that was the deadline to register in order to be eligible to vote in next Tuesday’s special election.

Not surprisingly Doug Jones, the Democratic candidate has been tied to the drive to register the felons.  We say “not surprisingly” because Jones had previously spearheaded a project for a Soros-financed legal activist group demanding full voting rights be given to felons released from prison, including those convicted of murder, rape and other violent crimes.


Glasgow’s plan calls for “swarming the polls” with newly registered convicts with the intention of swing the vote to Doug Jones.  Glasgow cited the Virginia governor’s race as the template for his efforts. In Virginia, Governor Terry McAuliffe used his executive power in April to restore voting rights for over 200,000 felons.

Glasgow has a checkered past himself.  The Village Voice has characterized Sharpton’s half-brother as an “ex-con and recovering crack head turned street preacher.”

Is that the best that Soro’s billions can buy?  No wonder President Trump decided to throw in behind the embattled Moore on Monday after the news of Glasgow’s involvement became known: 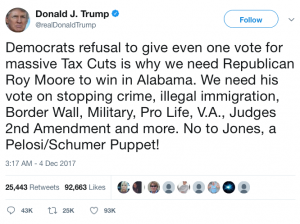 Next Tucker Carlson Just Blew The Lid Off The Vegas Coverup!