Texas country music star Kevin Fowler shared online a picture of the snake he killed in his shed, and startling photos of what happened when his friend was bitten. The country star came under fire for killing the snake, but that’s when he showed the pictures of his friends’ bite.
“Ran into this little fellow in my shed this week. Third one this month,” Fowler wrote with a picture of the dead rattlesnake. 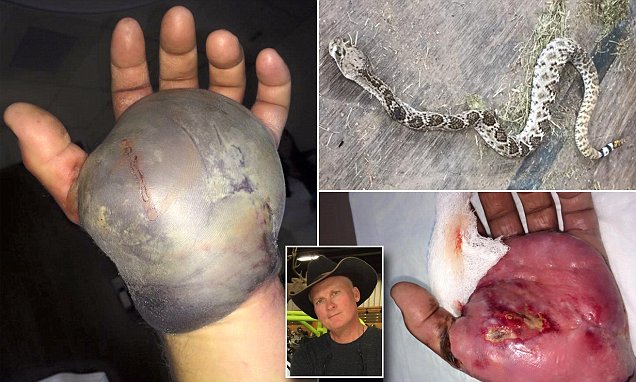 “All of you people who cry about folks killing rattlesnakes have probably never seen what it looks like when you get bit by one,” he wrote. “The other two pics are of my buddy Tommy’s hand after getting bit. He’s still going through surgeries and rehab. All of you rattlesnake sympathizers will change your tune when your kid gets bit playing in your backyard.”
“The only good rattlesnake is a dead one,” one commenter wrote.

“You guys misunderstand the Crotalus genus and species as a whole, sorry you guys lack education they play a big role in the ecosystem and the venoms are actually being used for several cures work is being done here, yet you guys blindly kill them without understanding and lack of knowledge,” one said.

“Lose cows to these d*** things every year, kill em all,” another said.

“You are determined to piss people off with this s***. I already deleted all of your music off my phone, which was hard because I am die hard Texas country fan and I have seen you in concert more times than I can count. This is getting absurd. I grew up in the country. S*** happens. Yes venomous snakes can bite. They doesn’t mean that we need to be redneck Neanderthals and kill them all. Learn to be a real country boy and coexist,” another comment reads.

Next Trump Redecorates With Yet Another Historical Piece Causing Controversy