ST. LOUIS, MO — Thursday is the start of Black History Month.  To mark the occasion the red, black and green pan- African flag will be raised at St. Louis City Hall at 10am.

(RNN) – The Star-Spangled Banner will have company on the flagpole outside city hall in St. Louis, MO, this month.

The city celebrated the first day of Black History Month by raising the pan-African flag. The red, black and green horizontal stripped banner will fly just below the U.S. flag for the entire month of February.


It’s the fifth year the city has flown the pan-African flag. Lewis Reed, President of the Board of Aldermen in St. Louis, said the African-American Aldermanic Caucus suggested the city raise the flag in February 2014 in celebration of what African-Americans have contributed to the world. 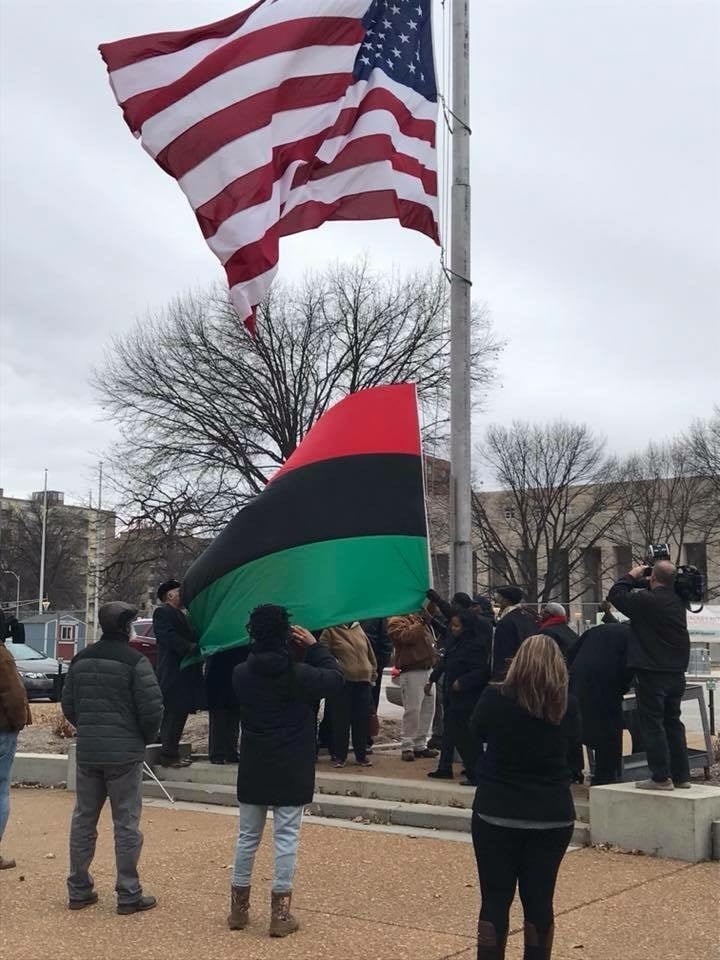 Toronto may be the only other city in North America that flies the flag.

Reed said when the flag first flew in 2014, the city did not face a lot of pushback.

“The flag is about education,” Reed said. “One of the many problems African American’s face is we see our history rewritten.”

The Universal Negro Improvement Association created the flag in 1920.

“The red stands for the blood of African-Americans and the bloodshed of those who fought for liberation. The black stands for all people of African descent. The green stands for growth,” Reed explained.

While the pan-African flag is not the official flag of any African nation or the continent itself, many countries in Africa have flags based on its design. The flags of Biafra, Kenya, Libya and Malawi all drew inspiration from it.

Reed has served as the President of the Alderman Board since 2007. He’s the first African-American elected to the position. It’s one of the reasons why seeing the flag go up means so much to him.

Read more on this: TucsonNow

Next Video: Father of Nassar Victims Climbs Over Desk In Attempt To Attack Nassar