“I would ask you, as part of the sentencing to grant me five minutes in a locked room with this demon,” he asked. “Would you give me one minute?” When the judge declined, he charged at Nassar.

The father of three daughters who have been abused by Larry Nassar attempted to attack the former doctor in Eaton County court Friday before he was tackled and arrested by security. Before he moved toward Nassar, the man asked the judge for personal time alone with the “demon.” “I would ask you, as part of the sentencing to grant me five minutes in a locked room with this demon,” he asked. “Would you give me one minute?” When the judge declined, he charged at Nassar. 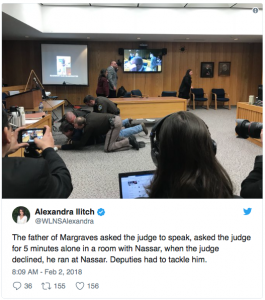 Larry Nassar, the former team doctor for USA Gymnastics and Michigan State University, will be back in court Friday for his third sentencing hearing in as many months on charges of criminal sexual misconduct.

At least 65 accusers are expected to testify against him over days of testimony, which began Wednesday in Michigan’s Eaton County Circuit Court. Accusers say his abuse spanned more than two decades.

Here’s how we got here and what’s coming next:

• In January, Nassar was sentenced to between 40 and 175 years in prison. Nassar had pleaded guilty in Ingham County, Michigan, to seven counts of criminal sexual conduct — three of which involved victims under age 13 — and admitted to using his stature as a medical professional to assault and molest girls under the guise of medical treatment.

• In December, Nassar was sentenced to 60 years in prison. He had pleaded guilty in federal court to three charges of child pornography. As part of the plea deal, officials agreed they wouldn’t prosecute Nassar for sexual exploitation and attempted sexual exploitation of children.

His accusers refuse to be silenced

• More than 200 of Nassar’s victims will have addressed the courts. In addition to the 65 expected to testify in Eaton County, more than 156 women gave heartrending testimonies last month in Ingham County. His accusers included high-profile Olympians Aly Raisman, Gabby Douglas and McKayla Maroney.

• Olympian Simone Biles also said she was sexually abused by Nassar. Biles’ statement came on the eve of Nassar’s sentencing in Ingham County last month, though she didn’t testify. She told CNN on Wednesday she wasn’t emotionally ready to face her abuser and that she’s “trying to move forward.”