Police say there is a bomb threat to blow up Trump Tower in Chicago. Standby for updates.

Right now the only source we can find is FOX32 out of Chicago. Below is their Facebook page but check back here for more. We will post it as we find updates.

We are searching diligently to find more on this, ONE thing to note is this is an authentic Fox Station, possibly they were hacked? If you find something send us a note on facebook!

We are seeing more shares on social from the FOX32 facebook but still nothing confirmed. 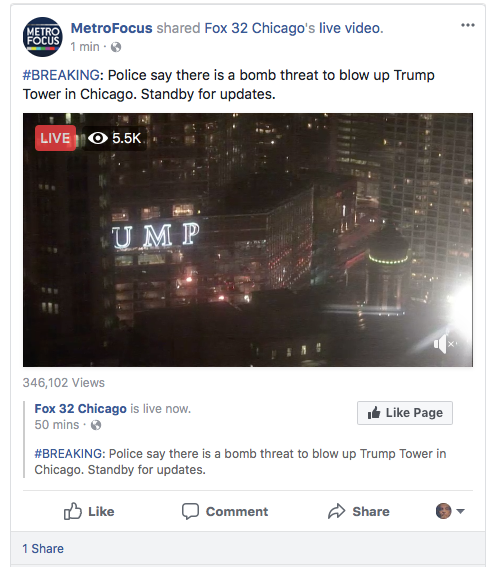 From Wikipedia, the free encyclopedia

The Trump International Hotel and Tower, also known as Trump Tower Chicago and Trump Tower, is a skyscraper condo-hotel in downtown Chicago, Illinois.

The building, named after businessman and current U.S. President Donald Trump, was designed by architect Adrian Smith of Skidmore, Owings and Merrill. Bovis Lend Lease built the 98-story structure, which reaches a height of 1,388 feet (423.2 m) including its spire, its roof topping out at 1,171 feet (357 m). It is next to the main branch of the Chicago River, with a view of the entry to Lake Michigan beyond a series of bridges over the river. The building received publicity when the winner of the first season of The Apprentice reality television show, Bill Rancic, chose to manage the construction of the tower over managing a new Trump National Golf Course and resort in Los Angeles.

Trump announced in 2001 that the skyscraper would become the tallest building in the world, but after the September 11 attacks that same year, he scaled back the building’s plans, and its design underwent several revisions. When topped out in 2009, it became the fourth-tallest building in the US. It surpassed the city’s John Hancock Center as the building with the highest residence (apartment or condo) in the world, and briefly held this title until the completion of the Burj Khalifa.

Trump International Hotel and Tower as viewed from street level

The design of the building includes, from the ground up, retail space, a parking garage, a hotel and condominiums. The 339-room hotel opened for business with limited accommodations and services on January 30, 2008, then full accommodation and services on April 28. A restaurant on the 16th floor, Sixteen, opened in early 2008 to favorable reviews.

The building topped out in late 2008 and construction was completed in 2009. As of 2015, the hotel is among three in Chicago with an elite five-starForbes Travel Guide rating. The restaurant is one of three five-star Forbes-rated restaurants in the city and the spa that is one of six that is at least a four-star Forbes-rated in the Chicago area in 2015. Sixteen is one of five restaurants in Chicago with at least a Michelin Guide two-star rating in 2016.

Next Ashley Judd Says Women Have More Rights In Middle East, Gets An Unexpected Response