VIA| A family tradition is carried on as the sister of convicted mass murderer Dylann Roof, Morgan Roof, was arrested for threatening to do the same thing her brother did. Dylan was convicted for gunning down nine churchgoers in Charleston S.C. in 2015.

His sister, Morgan, who is currently 18-years-old, was picked up by police and transported to a detention center on one count of drug possession and two counts of carrying a weapon to school. Richland County Sheriff’s department described the weapons as a small knife and pepper spray.

WACH-TV in Columbia reports: “No students were harmed and [Morgan Roof] has been transported to the Alvin S. Glenn Detention Center.

She [appeared] in bond court Wednesday night, where her bond was set at $5,000, and was charged with carrying weapons on school property. She was also ordered not to [return] to the incident location.”

The reason for Roof’s arrest is because she was brazen enough to post on Snapchat about her feelings and possible intentions. Her social media account conveyed to the world that she hoped any student participating in the national “walkout” to stand against gun violence would be shot. She also made some racial comments about how she didn’t believe there would be any participants other than African Americans.

“Your walking out of the allowed time of 17min, they are letting you do this, nothing is gonna change what tf you think it’s gonna do? I hope it’s a trap and y’all get shot we know it’s fixing to be nothing but black people walkin out anyway,” she posted. 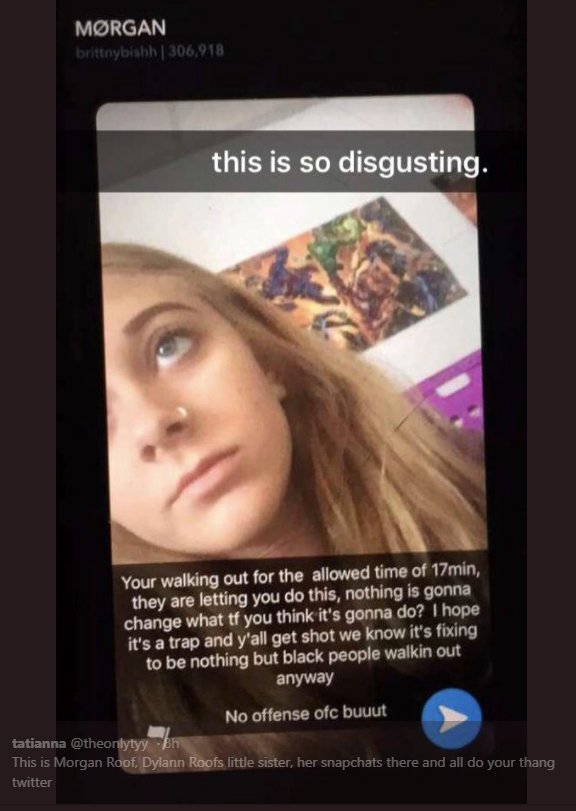 NPR reports that according to the Sheriff’s department, they learned of the post from school staff and Roof was arrested promptly.

“Susan Childs, the principal at AC Flora, said in a statement to parents and students: “As many of you know, today was set as a time for a student walkout. Our student leaders had asked to be allowed to spend seventeen minutes to remember each of the victims of the Parkland, Florida school shooting.”

“[A] student used social media to post a hateful message. The posting was not a threat, but was extremely inappropriate. That student was dealt with in a swift and severe manner as the posting caused quite a disruption,” Childs said.

South Carolina Govoner Henry McMaster made a statement, noting that a “potential tragedy was avoided” at the school. “We owe a debt of gratitude to all involved who acted so quickly and decisively,” McMaster said.

This noting the quick actions of law enforcement is no doubt meant to be a stark contrast to the lack of police intervention by police when they were made aware of the Parkland Shooter’s violent tendencies. 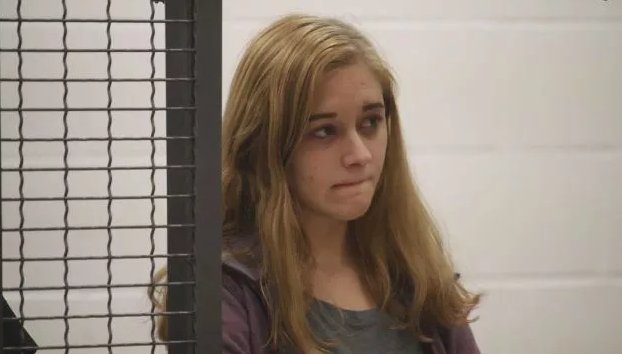 While it was previously unknown that Morgan shared her brother Dylann’saggressivelyy violent attitudes, Dylann was very plain spoken about his feelings about his fellow humans: “Dylann Roof, a self-avowed white supremacist, killed nine African-American parishioners during a Bible study at Charleston’s Emanuel African Methodist Episcopal Church in June 2015.

In January 2017, he was sentenced to death by lethal injection. Roof pleaded guilty to state murder charges and was found guilty by a jury in Charleston on 33 counts of federal hate crimes. He is currently awaiting execution at the United States Penitentiary in Terre Haute, Ind.”

The principal at A.C. Flora High School sent a message to parents. Read the full statement below: “AC Flora is fortunate to have a close and caring community which is open to sharing information. I want to thank those of you who have called to share concerns about what you may have heard from our students. In an effort to stop rumors, I would like to explain recent events that have occurred at AC Flora.

As many of you know, today was set as a time for a student walkout. Our student leaders had asked to be allowed to spend seventeen minutes to remember each of the victims of the Parkland, Florida school shooting. This student-led event was voluntary. The walkout went well with only a minor verbal disagreement that occurred at dismissal from the event. A rumor then started that a certain student had a weapon. This was heavily investigated and found to be inaccurate. In a separate situation, a student used social media to post a hateful message. The posting was not a threat, but was extremely inappropriate. That student was dealt with in a swift and severe manner as the posting caused quite a disruption.

In an isolated incident yesterday, administration was notified that there was possibly a weapon on campus. Through diligent work from the Assistant Principals and the School Resource Officers, an unloaded weapon was recovered. The investigation of this matter involves law enforcement as well as school officials. Discipline for students involved will follow the Richland One Code of Conduct.

I realize that rumors and the tragic school shootings in Florida are events that can cause anxiety for our students, parents, faculty, and the community. Be assured that the safety of our students will always be our top priority. We must continue to work together to maintain a safe and positive learning environment. Please feel free to contact me at 803.807.8697 if you have questions or concerns.

During this violent and tumultuous time, both parents and students are very concerned for their own safety. While Republicans and Democrats disagree on what constitutes the correct kind of change to keep kids safe, it appears that if a solution isn’t found soon, more violence might ensue.

Next Authorities Say Video Discovered On Teens Girls Cellphone, One Of The Most Disturbing [WATCH]