President Donald J. Trump and First Lady Melania have just sent a huge message to the Democrats about how they lit up the White House. It was a message to millions of people around the world to let them know they were important and everyone cares for them. It was a message to Democrats that the people in charge of the White House have a much bigger message to Americans and that they are not what the mainstream media portrays them to be. So many people have turned the White House into a building filled with monsters, but the real monsters are the people who fail to see the positive aspects and doings of the sitting president. The country needed change and they voted it in.

The White House was there, shining in glory, with a fine shade of blue. This was for World Autism Day, which was celebrated on Monday, April 2, 2018. This year marked a special time in American history as the white house was lit up and sending a message to all who care, and even those who don’t care. It was a wonderful symbol that showed compassion and kindness. Many people criticize President Trump and label him numerous different things. Some say he’s horrible, he’s a tyrant, he’s this and that. However, the truth is the opposite. He’s none of those subjective opinions and he and Melania certainly do care about the well-being of the American people.

Trump may not be the most “presidential” President in the sense that he’s not a politician, but he’s certainly more caring than many people believe. He’s all about America and that’s something critics can’t take away from him. 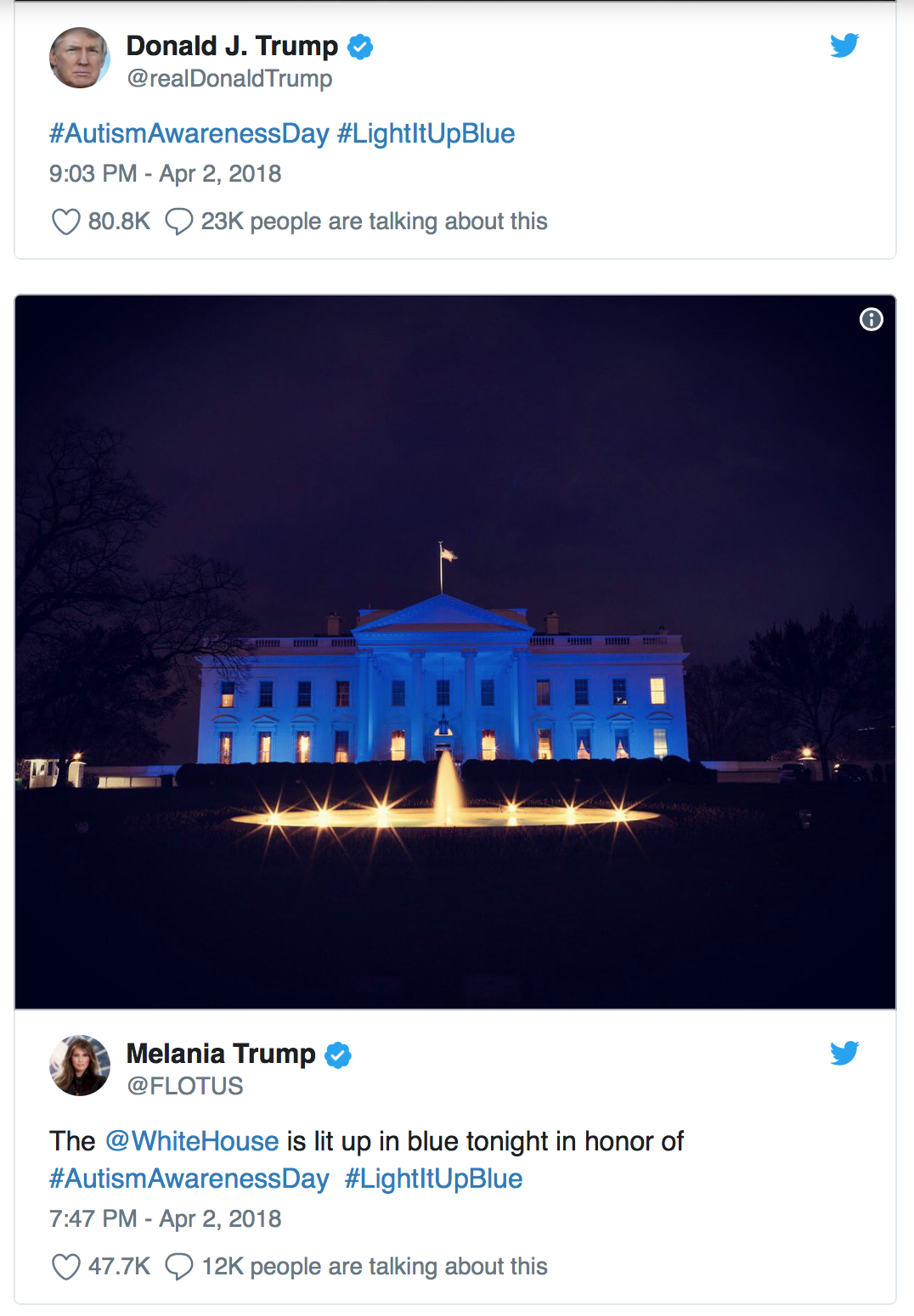 This statement was posted on the White House website regarding World Autism Day: “World Autism Awareness Day is an opportunity to recognize and support all children and adults with autism spectrum disorder (ASD). Today, millions of adults and an estimated 1 out of every 68 children in the United States have been diagnosed with some form of ASD. Notwithstanding these diagnoses, Americans with ASD make exceptional contributions across our Nation and around the world. On this day, we honor their accomplishments and recommit to ensuring that they enjoy the same opportunities to fulfill their potential that all Americans deserve.


To maximize the quality of life across the entire autism spectrum, we must ensure that ASD is accurately identified and diagnosed in both children and adults. We must also support access to effective care, critical resources, and support services. To further these important goals, I was pleased to sign into law the Recognize, Assist, Include, Support, and Engage (RAISE) Family Caregivers Act, which will provide a national framework to support families as they care for loved ones with ASD and other similar conditions.

My Administration also continues to focus on young adults with ASD. The Department of Health and Human Services, in accordance with the Autism CARES Act of 2014 and in coordination with other executive departments and agencies, has released a report that details services available for young people with ASD as they leave secondary education to help them transition to adulthood. In addition, the Department’s Interagency Autism Coordinating Committee ensures robust engagement with people with ASD and their families to help inform policies and priorities. My Administration remains focused on this critical work and committed to advancing initiatives that improve the lives of those living with ASD.

On World Autism Awareness Day, let us renew our commitment to support the entire international ASD community, including children and adults with ASD, their families, and caregivers. Together, we can increase access to information, encourage heightened understanding of ASD, promote respect and dignity, and support the services that assist people with ASD to reach their full potential.

NOW, THEREFORE, I, DONALD J. TRUMP, President of the United States of America, by virtue of the authority vested in me by the Constitution and the laws of the United States, do hereby proclaim April 2, 2018, World Autism Awareness Day. I encourage all Americans to learn more about autism, and find ways to support people with autism and their families and caregivers.”

The White House, Donald Trump, and Melania Trump made a great statement that supports those with Autism. It’s wonderful to see such a statement come from the biggest house in the nation as the blue lights glistened over D.C.

Read more on this: Daily-Vine