Then he says we should try to be more like them. Check THIS OUT!

But here are a couple of things you may not know: in the United Kingdom it is perfectly legal to buy an AR-15 rifle, In the UK at least, it’s the gun of choice for the modern-sporting-rifle enthusiast. Rifles like the AR (another common misconception is that AR stands for Assault Rifle; it actually stands for Armalite Rifle, after its original manufacturer) are generally used for target shooting and, in the US, hog hunting too. Where it gets murky (and, in my opinion, disturbing) is when you hear from Americans who want them to defend against an imagined tyrannical government – an admittedly vocal but thankfully small minority of gun owners.

Yorkshireman Paul Oglesby grew up around guns. His father, a film cameraman, took him fishing and shooting and Oglesby told me country sports were in his blood. Today he runs Lantac, a UK supplier of custom AR-15s.

Oglesby sells fully automatic weapons to the military, and single-action models (on which you have to pull the bolt back to empty the chamber and re-load) to British target shooters who have applied for a licence. Semi-automatic models are also legal in the UK but they fire .22 rimfire cartridges – lower calibre bullets than their single-action equivalents. “Us Brits are exceptionally good [at shooting sporting rifles],” Oglesby told me. “We have some of the best competitive shooters.”

Oglesby worries that the demonisation of the AR and its accessibility in America will draw attention to the fact that the same guns are legally available in the UK. But Oglesby’s point is that sensible gun control can mean people like him – who enjoy using guns for sport – can go on doing so.

Oglesby thinks we have some good and sensible firearms laws in the UK. “There are unsavoury characters in every country but the difference is that children here will never get hold of a firearm legally. In America, it’s easy, and once they’ve got it, there’s no restriction. They leave it on the draining board, on the fridge or kitchen table. You have kids running around on Ritalin and their parents don’t even lock their guns up.”

Recently at Shot show they saw this..

You can hear in the video where the Lantac Rep even says, “yes this is how we shoot ARs in the UK”, because they can’t have centerfire Armalite patterned rifles that are semi auto.   NOW this could be the GQ writer twisting the words of Oglesby when he says “Oglesby thinks we have some good and sensible firearms laws in the UK.”  but it needs to be pointed out that this guy does happen to run one of only two companies in the world that would profit tremendously if UK gun laws were imposed in the US since his company makes single shit bolt action AR conversions (as seen here in this shot show video). Lets talk about UK and their sensible laws 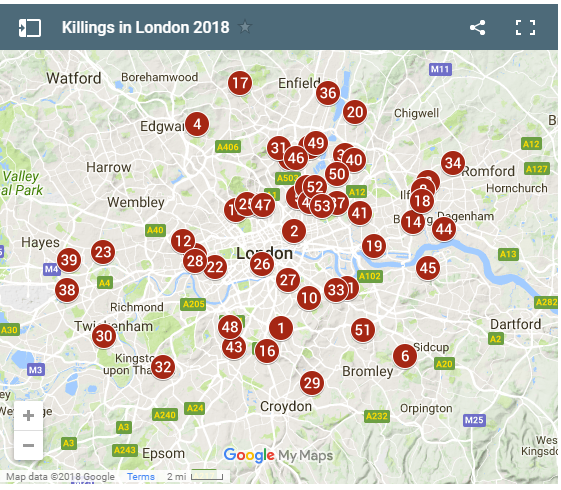 At least 35 of those killed were stabbed to death in an epidemic of violent street crime which has led to a rise in the use of police stop and search powers. “

Yup these are pretty good numbers, And they have overtaken NY as a violent city.  Because that’s what we need in the US more stabbings.  The UK has some of the toughest gun control laws in the world. If you want to own a gun, it is very difficult to do so.  In short, it has been designed to put as many barriers in the way as possible and to assume the worst, rather than hope for the best.  In the United States, you can declare that it is your constitutional right to bear arms, but in the UK, you need to spend hours filling in paperwork and proving to police officers that you are not a danger to society.

CONTINUING, the UK does have it’s own firearm issues as well, and is seeing a rise in the “misuse” of firearms….(notice they don’t call it “gun violence, or shootings)

In January, the UK’s Office for National Statistics published the statistical bulletin, “Crime in England and Wales: year ending September 2017.” In a section titled, “Offences involving weapons recorded by the police continue to rise,” the document detailed the increasing misuse of firearms in Britain.

The problem appears to be most pronounced in London and the surrounding areas. The report indicated, “around half (50%) of the increase in England and Wales occur[ed] in the Metropolitan Police force area.” While the bulletin dismissed some portion of the rise in firearms offenses to better reporting practices, the ONS noted, “Evidence of some genuine increase in offences involving firearms can be seen in admissions data for [National Health Service] hospitals in England.”

It sickens me that we are seeing more and more gun industry company leaders endorsing infringement on the 2nd Amendment or pushing “sensible gun control”, just to make a quick buck.  Companies  need to stick to what they are good at, producing firearm parts, and products and keep their noses out of the Political Spectrum, and I would even go as far to say keep your mouths shut.  UK Firearm laws are laughable at best and the country can BARELY contain what issues that have sprung up since they have done everything in their power to disarm and render helpless their citizens, while still maintaining a holier than thou appearance.

There is a reason we have the 2nd Amendment, and in NO WAY should we be taking advice from a country’s spokesman, where they list acid as a “highly dangerous weapon.”

Next Do You Think Tiffany Trump's Outfit Was Inappropriate? Look Below Her Waist And Decide [PHOTOS]