This behemoth strolled right past a group of tourists on a walkway without a care in the world!

Florida residents, and even tourists, have grown accustomed to the presence of alligators. For the most part, they keep to themselves. Rarely does a gator become a problem and, if it does, authorities are equipped to deal with it.

How would authorities manage an alligator big enough to be in Jurassic Park? Yesterday, a monstrous gator was filmed on a walkway at Circle B, near Lakeland, Florida. This gator is large enough to eat a fully grown cow or water buffalo. He is so large that I am hoping and praying that he is slow, as I cannot imagine any human being able to wrestle him. He is so massive, in fact, that multiple gunshots might be required to take him down if he were to become aggressive or a threat to people.

Take a look at the pictures, with video below: 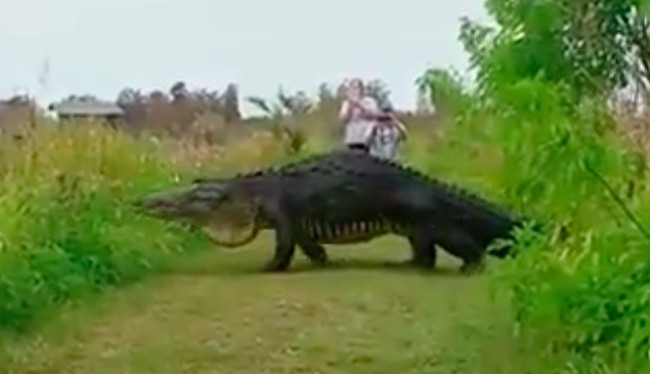 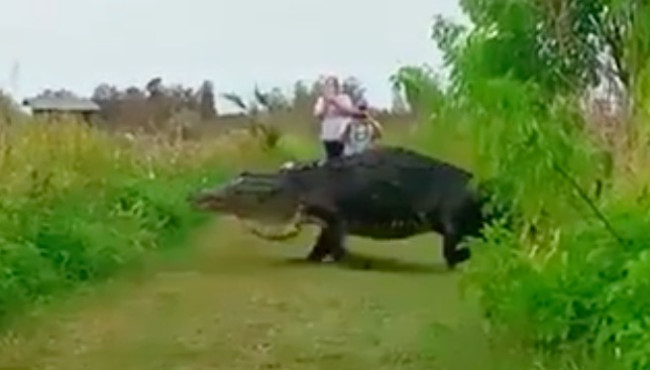 Wow! Take a look at this massive gator!! Kim Joiner took this video yesterday while at Circle B Bar Reserve in #Polk County. @FOX13News pic.twitter.com/oTEhb3XRzY

video caption: A giant alligator was caught on camera during a morning stroll at a nature center in Polk County.  The Lakeland Police Department shared the video, taken by Kim Joiner, on their Facebook page saying, “Who says Dinosaurs are extinct?”  The big daddy gator was strolling through the Circle B Bar Reserve, an area of of protected lands in Polk County. In the video you can see four other people recording the surprise encounter, and not from a far distance – Ekkk!

This is not the first time a massive, dinosaur alligator has been spotted in Florida. Check out this monster from last year:


Previous US one Dead Russian Away From WWIII?... Active Strikes On Syria- Explosions Heard In Damascus.....