Liberalism has failed so many people. It is kept people poor and enslaved to a mentality of poverty and lack. Liberal Democrats have created peasants for decades, while their leaders enjoy elite status. It is like a pyramid scheme set up through government laws and red tape. They convince people that they are powerless and oppressed, then rule over them while handing out just enough entitlements to keep them under control.

Consider the information in the chart, below. Most everyone knows that the once-thriving Detroit, Michigan,  has been in economic ruin for years. Both Detroit and Memphis, Tennessee, are known for their violent crime. This chart racks and stacks the Poverty Rates and Violent Crime Rates in Top 5 lists than even liberals can understand. 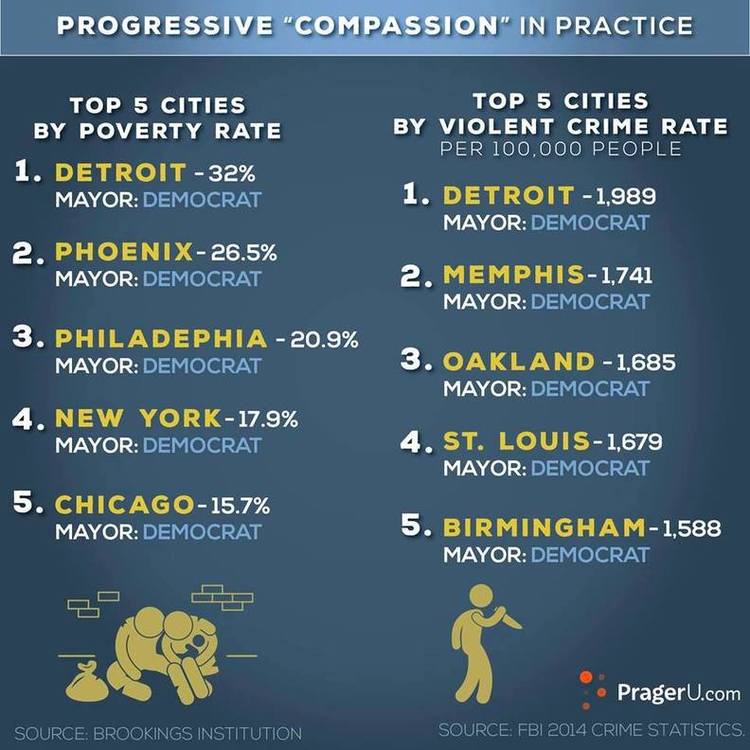 Is there any doubt that all of the Democrat mayors of the cities listed in the chart were elected because they promised entitlements and handouts to the masses? What will these mayors do for a living if the people of their cities start thriving? It is truly a political, governmental scam.


I am a little surprised that Chicago did not make the Top 5 Violent Crime list as it is known for its problems in that area. NeighborhoodScout reports:

The crime rate in Chicago is considerably higher than the national average across all communities in America from the largest to the smallest, although at 39 crimes per one thousand residents, it is not among the communities with the very highest crime rate. The chance of becoming a victim of either violent or property crime in Chicago is 1 in 25. Based on FBI crime data, Chicago is not one of the safest communities in America. Relative to Illinois, Chicago has a crime rate that is higher than 94% of the state’s cities and towns of all sizes.

The crime data that NeighborhoodScout used for this analysis are the seven offenses from the uniform crime reports, collected by the FBI from 18,000 local law enforcement agencies, and include both violent and property crimes, combined.

Now let us turn to take a look at how Chicago does for violent crimes specifically, and then how it does for property crimes. This is important because the overall crime rate can be further illuminated by understanding if violent crime or property crimes (or both) are the major contributors to the general rate of crime in Chicago.

For Chicago, we found that the violent crime rate is one of the highest in the nation, across communities of all sizes (both large and small). Violent offenses tracked included rape, murder and non-negligent manslaughter, armed robbery, and aggravated assault, including assault with a deadly weapon. According to NeighborhoodScout’s analysis of FBI reported crime data, your chance of becoming a victim of one of these crimes in Chicago is one in 110.

Significantly, based on the number of murders reported by the FBI and the number of residents living in the city, NeighborhoodScout’s analysis shows that Chicago experiences one of the higher murder rates in the nation when compared with cities and towns for all sizes of population, from the largest to the smallest.

NeighborhoodScout’s analysis also reveals that Chicago’s rate for property crime is 30 per one thousand population. This makes Chicago a place where there is an above average chance of becoming a victim of a property crime, when compared to all other communities in America of all population sizes. Property crimes are motor vehicle theft, arson, larceny, and burglary. Your chance of becoming a victim of any of these crimes in Chicago is one in 33.

Importantly, we found that Chicago has one of the highest rates of motor vehicle theft in the nation according to our analysis of FBI crime data. This is compared to communities of all sizes, from the smallest to the largest. In fact, your chance of getting your car stolen if you live in Chicago is one in 266.

When will liberals admit that their policies have failed?

H/T TO: [THE FEDERALIST PAPERS]