As a former police officer for two decades Sgt. Silvia Cotriss had done her job well. She was dismissed because of displaying conduct unbecoming. Former Georgia police officer was fired after flying a Confederate flag outside her house. 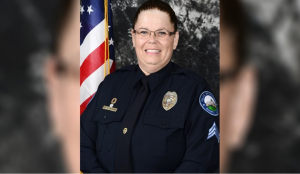 According to CBS46 Sgt Cotriss said:  “I did absolutely nothing improper in displaying the US & Confederate flags on my own property, and being fired by Roswell PD violates my First Amendment rights.”

An upset neighbor with Cotriss’s flag reported this to the police, as a result, she was terminated.  The community member believes that Contriss’s Confederate flag outside her house contradicts her oath to protect and serve Roswell.

Cotriss said: “If I knew it offended someone, my friends, my family, I wouldn’t do it. Police officers have to adjust a lot of things in our lives, and for 20 years my whole life has been about making change and being held to a higher standard. We take an oath to help and protect people, so we can’t have a private life that’s really bad.”


In July 2016, Roswell Police received an email complaint from a local. The email read, “But in the same sentiment if I were to ever be pulled over or some situation where my family needs the police to protect and serve, my first thought/fear is that it may be the officer proudly flying his/her Confederate flag.”

The complainant claims that she placed her GA with her cruiser under a rebel flag. Cotriss grounds for termination was unbecoming conduct and duty regarding conduct, which says an employee must not do anything that jeopardizes the public’s respect for the employee or the department.

According to CNN her attorney David Ates said:

“She was displaying her pride in her Southern heritage and honoring her recently deceased husband. The Confederate flag is generally accepted symbol of Georgia heritage.”

CNN reported that Cotriss is suing the city of Roswell and the Roswell chief of police for either reinstatement of her former position or 10 years of pay, as well as other compensatory damages.


Previous Mayor Caught With HOT MIC, Says Something About Trump She Didn’t Want Anyone Hearing

Next Notorious 'Octomom' Says She Is “Too Pretty” To Work..... [PHOTOS]