While most of the single parents’ works hard to give their children a good life and a better future, but Marie Buchan is earning money without too much effort.

Marie Buchan is a mother of eight. She decided not to get a job because she thinks she was too beautiful. To provide for her children, Buchan is receiving nearly $30,000 in welfare benefits from the British government. 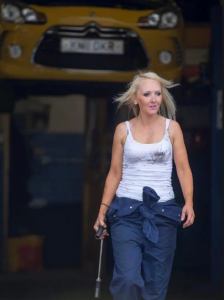 Buchan chose a field of work as an auto mechanic. However, she thinks that her chosen field is not a good place to earn money. She believes that she was too attractive and nobody wants to hire her. Recently, Buchan decided to undergo breast augmentation surgery. She denies on using the funds she receives from the British government but it will be her boyfriend who will fund the expensive procedure.

Most of the people believe that she is capable of getting a job and her so-called attractive looks will not stop her from being hired. She seems to rely on the benefits system of the British government getting money from the taxpayers. Once she gets a real job, her benefits will eventually be discontinued which she would not want to happen.


Meanwhile, to become a mechanic she is taking classes at a local college.

In the past, on weekends she worked 16-hours of work each week as a caretaker but she leaves the job when her family starts to grow. While British government funds her lifestyle she loves to spend her extra time with her family.

Even though she receives financial support from the government, she still continues to astonish at how hard it is to build a family alone. Her children all range between two-years and 13-years old which have the same father.

Marie Buchan lifestyle is harshly criticized by the public. To defend her preference, she appeared on talk shows.  However, British taxpayers still do not agree with her choices. They believe that people like her who is capable of earning and providing the needs of her children should not receive support from the government. The government should support the citizens who really cannot help themselves.

Next Vietnam Era Sniper Was Considered The Best Of The Best, His Story Is EXTRAORDINARY