Since the Garland attack, the country, and the state of Texas, has been more than a bit on edge by this Islamic aggression on U.S. soil. In fact, this Marine is fed up with the idea that terrorists can pull that kind of _ _ _ _ in his country, or in Texas! So, he decided to stand up and do something about it. 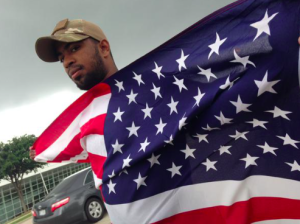 Marine Joseph Offutt has been standing strong and proud with the American flag near the location where the shooting took place in Garland, Texas- Offutt’s hometown.

Raised by an Army family, this 21-year-old Marine decided to stand up in the most admirable way when he noticed America was living in fear after the attack.

“People are already afraid since 9/11 and I don’t want people to be scared so I’ve been out here every day since Tuesday holding the American flag,” 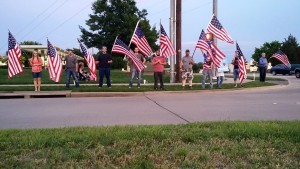 And since he started his Take-A-Stand-Tuesday demonstrations, he’s developed a large following. The crowds that have joined in the demonstrations is inspiring, to say the least. It seems Offutt isn’t the only one who wants to see America stand strong against Islamic terror.


Previous Employees Overhear Man's Question, Act Quickly When They See What's Next To Him

Next Want To Avoid Getting Bitten This Summer? Here’s The Simple Trick Everyone Should Know