A massive hole opened in the middle of the frozen Weddell Sea of Antarctica last month.

Persistent areas of open water in places where you’d expect sea ice, such as in the Arctic and Antarctic, are known as polynyas, according to the National Snow and Ice Data Center.

(The hole in the sea ice as seen by NASA satellite imagery on September 25.NASA)

A massive hole called a polynya recently appeared in Antarctica’s frozen sea ice.
The hole is unusual because it’s huge and far from the coast where such open water patches more frequently appear.
Another larger version of this polynya was observed in the mid 1970s.
A massive hole opened in the middle of the frozen Weddell Sea of Antarctica last month.


Persistent areas of open water in places where you’d expect sea ice, such as in the Arctic and Antarctic, are known as polynyas, according to the National Snow and Ice Data Center.

This Weddell polynya, however, is somewhat remarkable.

No one knows why it formed, and the hole is located quite far from the sea ice coastline, where such openings more frequently appear. And despite being exposed to freezing wintry winds over the past month, the polynya has persisted — so whatever force caused it to form is strong enough to keep it from refreezing.

But it’s not the first time this particular hole has appeared. Scientists observed a similar polynya in the same area of Antarctica in 1974, according to NASA Earth Observatory. It reappeared during the austral winters of 1975 and 1976, then disappeared and it didn’t re-emerge for decades. It re-appeared again in August 2016, though significantly smaller than it had been in the 1970s.

It’s easy to assume that a massive hole in sea ice is related to climate change, but that may not be the case. Some scientists speculate that the formation of the Weddell polynya is part of a cyclical process, though the details are unclear.

“Why was the Weddell polynya present in the 1970s, and then absent until its recent reappearance?” Willy Weeks, a retired sea ice geophysicist from University of Alaska in Fairbanks told NASA Earth Observatory when the hole first re-emerged in 2016. “Did the Weddell polynya occur before 1970, and we are looking at a periodic process that shows itself about every 40 years? If there were earlier occurrences, there is no record of them.”

(Sea ice and clouds blanket the Weddell Sea around Antarctica in this satellite image from September 25, 2017. A robotic float surfaced inside the hole at the location marked in yellow, which could help reveal exact what’s going on there.SOCCOM) 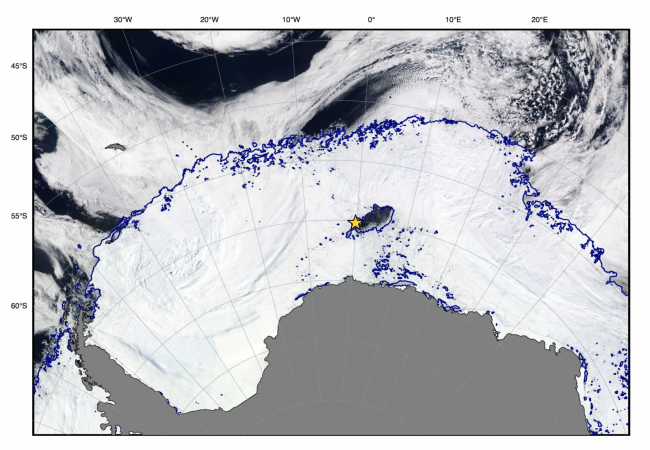 Polynyas allow heat to escape the ocean, cooling the top layer of water. As that water becomes colder and denser, it sinks, allowing more warm water to rise and keep the hole open. That sinking water contributes to the cold water mass known as Antarctic Bottom Water, according to NASA, which feeds into deep ocean currents and contributes to ocean circulation around the globe.

It’s possible that the phenomenon is a key part of the process that supplies Antarctic Bottom Water, according to Earther’s in-depth look at the polynya.

Part of the reason this polynya remains so mysterious is that it’s hard to explore sites like this. Winter air temperatures there are thought to be about negative 20 degrees Celsius and there are few flights or expeditions in Antarctica during the winter months.


Previous Marines Test All-Male Squads Against Mixed-Gender Ones; Here Are The Results…

Next Woman Gets MASSIVE Boob Job For Boyfriend, Fails To Realize ONE Little Thing [PHOTOS]