Snapping selfies might seem like a normal part of everyday life for most young people these days, so much so that many might often send them to friends or family without even taking a second to examine them in any detail.

Well one poor woman who made that mistake found herself paying for it in the worst possible way after she sent an image of herself to her brother, and her parents, without realizing that she had left two sex toys in the background.

And, to make matters worse, the woman’s brother proceeded to share grabs of her conversation both with him, and their parents, on Imgur – where it quickly racked up thousands of views and comments. 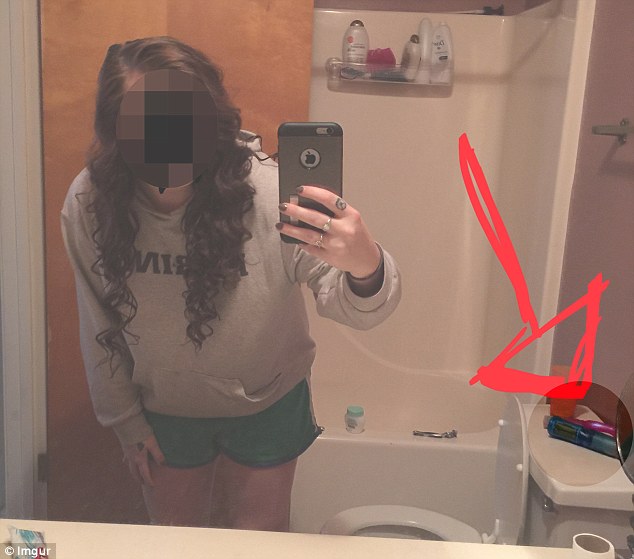 In the image, the unidentified person is seen in her bathroom, standing in front of the mirror while snapping a selfie on her phone that she later sent to her family in the hopes of showing off her new hairstyle.

‘Hair on [fleek] for my interview,’ the woman, who is seen wearing a casual outfit of green shorts and a hooded sweater, wrote alongside the image, before adding: ‘Now I have to go and put my mask on.’ 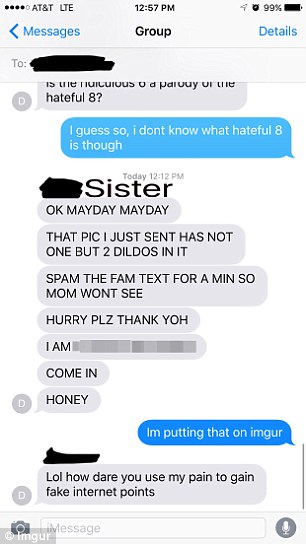 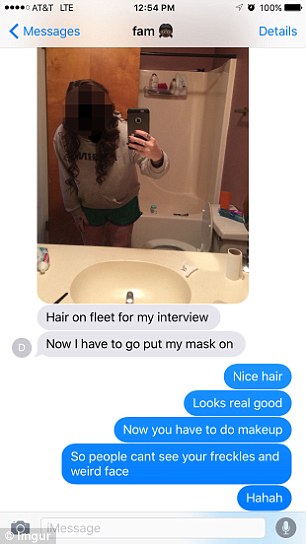 Interestingly, her brother – and indeed her parents – don’t initially spot that there is anything out of the ordinary in the image, and to the naked eye it is tricky to spot the two very personal items that she left laying on the back of her toilet.

In fact her brother stars poking fun at her for an entirely different reason, joking that she needs to go and put on some make-up so that ‘people can’t see your freckles and weird face’.

But their lack of response didn’t stop her from flying into a panic as soon as she realized exactly what was in the image that had been sent to her family.

The poor woman then begs her brother to ‘spam the fam text for a min so mom won’t see’, pleading with him to ‘please hurry’.

But far from being prepared to help his sister out of a very tough spot, her brother actually takes the opportunity to relish in her misery, replying to her desperate texts by saying that he was planning to put the image – and the whole conversation on Imgur – which he very quickly did.

Since the conversation, and the offending image, were posted, it has been viewed more than 159,000 times, racking up dozens of comments from other Imgur users who took the opportunity to either laugh at the woman’s plight, or to delight in her despair.