Sometimes, people do things just because they are nice. It’s the reason why you see someone give ten dollars to charity when they could only really afford five.  Donald Trump is one of those people. However, he can certainly afford more then the five dollars I just mentioned… 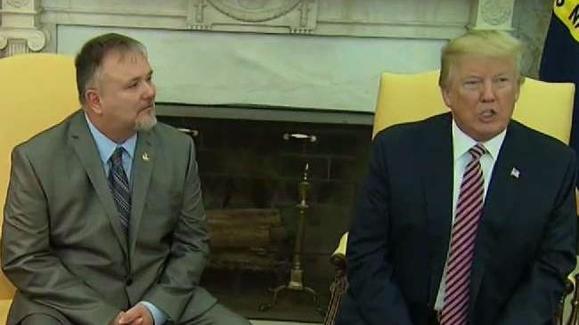 President Donald Trump has done more great things for the American people (and the country as a whole) in just one year than Barack Obama did in eight. No logical person can argue against that.

What’s more is that 45 is personally helping individual citizens during their time of need.

For example, after Trump gave a man $10,000 for cancer treatment, Don Bouvet showed up to the White House and uttered five words that let the world know exactly what the commander-in-chief did for him.

“The president saved my life.”


From Townhall: Last year, Townhall reported on President Donald J. Trump’s generous donation to a campaign volunteer’s father, Don Bouvet, for bladder cancer treatment. Today, Bouvet says the gift of $10,000 from the president saved his life and that he is now cancer free.

Don Bouvet’s son, Shane, was a volunteer on President Trump’s presidential campaign. After meeting with the president the night before his inauguration, Shane informed Trump of his dad’s condition with bladder cancer. President Trump was so touched by Shane’s dedication to both his father and his country, that the former real estate and reality TV mogul cut a check of 10 grand from his own pocket to help cover financial costs for chemotherapy.

Because of that, the Bouvets were able to get the necessary treatment for recovery. “The president saved my life,” Bouvet said to NBC 4 in Washington, DC. Don and Shane Bouvet got a chance to meet with the president in the oval office on Friday and tell the president firsthand.

More from NBC Washington: It was a personal check worth $10,000 from Trump, he said.

“Shane — You are a great guy — thanks for all of your help,” Trump reportedly wrote on presidential stationery.

Shane Bouvet told NBC4 he gave the entire sum to his father, who used it to pay the deductible on the treatment. Now cancer-free, Don Bouvet got his own chance Friday to meet Trump, who was impressed that Shane gave all the money to his dad.

Continued: “It’s very emotional because … one day I wanted to come here, or meet you somewhere, shake your hand, look you in the eye, and say, ‘Thank you for saving my life,’” Don Bouvet told the president. “And I thank you from the bottom of my heart.”

Trump was apparently so impressed that he gave the Bouvets another check for $5,000, Shane told NBC4. The Bouvets also left with another, possibly priceless, souvenir: a plaque with a note personally signed by Trump that reads, “To Shane, Great Going!”

The Bouvets said that Trump donated his personal money, which campaign finance experts told NBC4 complies with all relevant laws.