Hunter Day, a 22-year-old first-year high school chemistry teacher from Oklahoma, has been arrested for allegedly having sex with one of her male students. Day is also accused of sending the student nude photos.

Day, who was married while teaching at Yukon High School, was arrested on Wednesday, November 15, in a sting operation conducted by the Canadian County Sheriff’s deputies. The Sheriff’s investigators posed as the boy and found Day waiting for unidentified teen surrounded by lit candles. Investigators asked Day if the meeting was still on, and she allegedly said it was but added that he should hurry before her husband got home from work.

Day texted the teen’s cell phone that the “door’s unlocked as usual,” and investigators found Day sitting on the living room floor with the lights turned off and candles lit.

The investigation into Day’s conduct was prompted by a complaint from local parents who suspected that the teacher was having a sexual relationship with their son. The parents became suspicious after his behavior changed, prompting them to go through his phone, finding texts between him and the teacher.


Day was arrested and charged with second-degree rape, possession of child pornography, and soliciting a minor using technology.

According to authorities, Day cooperated and admitted to the allegations. 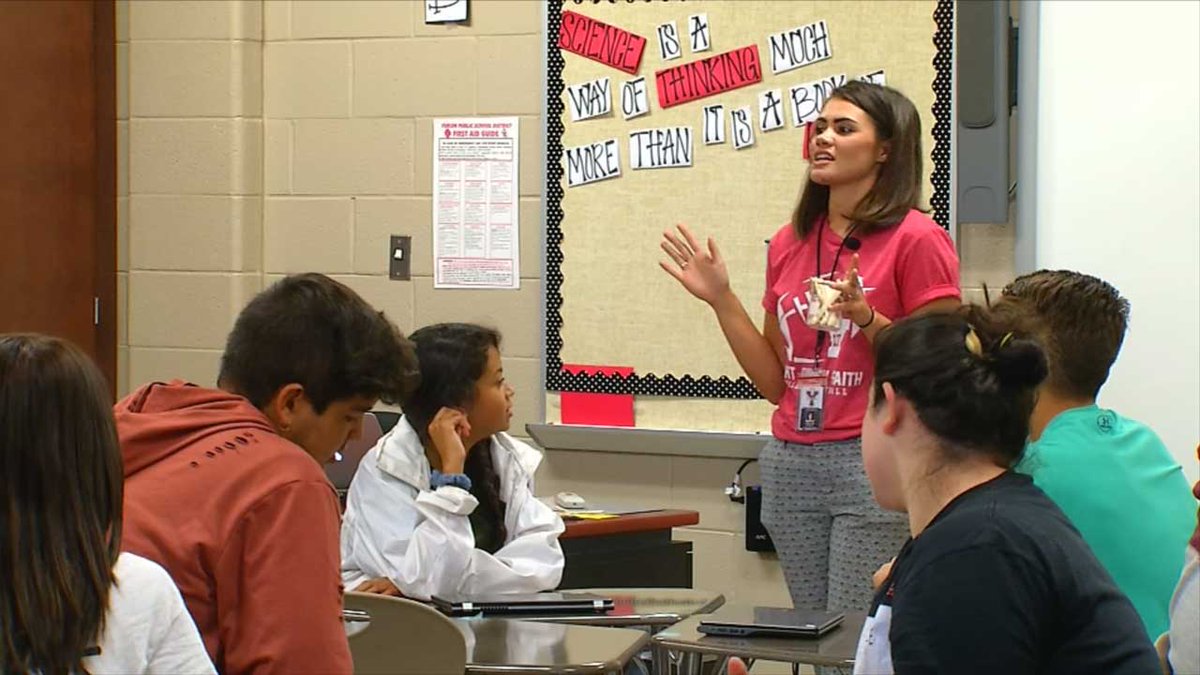 According to the sheriff’s office, deputies began investigating after they were contacted by the boy’s parents. Evidence of the relationship was found on the boy’s phone, including explicit text messages and nude pictures.

“This is a classic case of a serious breach of public trust. School teachers are entrusted to protect and educate our children, not to engage in an unlawful sexual relationship with them,” said Chris West, Canadian County Sheriff.

Investigators say Day and the boy had also arranged a meeting on the day of the arrest. When deputies arrived at the home, they sent Day a message from the boy’s phone, saying, “I’m here” to which they say Day responded, “The doors [sic] unlocked as usual.”

Authorities say when they came inside the house they found Day sitting on the living room floor with the lights turned off, candles lit, wearing a Christmas cat T-shirt and workout shorts. When confronted they say she admitted to sending “bra and panty” pics of herself, and admitted that she had received photos of the boy’s genitals.

Day was booked into the Canadian County Jail with her bond set at $85,000.

Yukon Public Schools was informed late Wednesday afternoon, November 15th, that an employee of the district was arrested for engaging in an inappropriate relationship with a high school student. This behavior was representative of a very poor decision by a person entrusted with teacheing our students.

The safety and well-being of our students is our number one priority. Yukon ultiizes application references, interviewing protocols and state background checks prior to hiring an employee in the district in an effort to protect our students. None of these security checks revealed anything that would have alered the district to the possibility of this event.

Yukon Public Schools is fully cooperating with local law enforcement officials during this ongoing investigation. The district is not at libery to discuss any further details of this incident or divulge names of any of the paties involved. All questions pertaining to this incident should be directed to the Canadian County Sheriff’s Department. 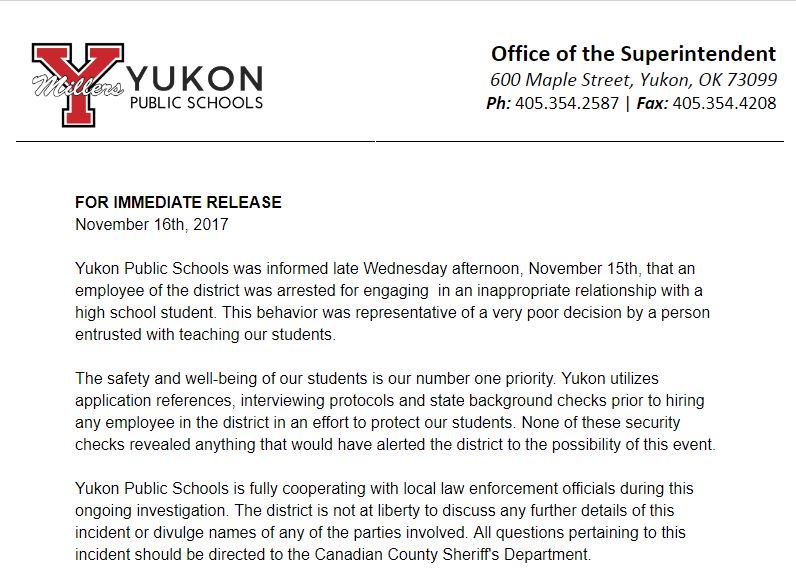 The Canadian County Sheriff’s also released a statement about their investigation into and arrest of Day:

“Day, a school teacher with Yukon Public Schools was arrested by investigators at her Yukon residence after the Sheriff’s Office received a complaint by the under-aged boy’s parents who brought their son’s cell phone to the Sheriff’s Office, and asked for a forensic review of the phone. The parents told investigators they had already been through the phone and discovered text messages and nude photographs, and were concerned Day had already had sex with their son. They were also extremely concerned because they believed Day was their son’s Chemistry teacher. In June 2017, Day had written to the Yukon School District, seeking the chemistry teaching job, saying that she has a “love for others and truly wish for everyone to succeed. I learn very quickly and adapt to an ever-changing environment.” 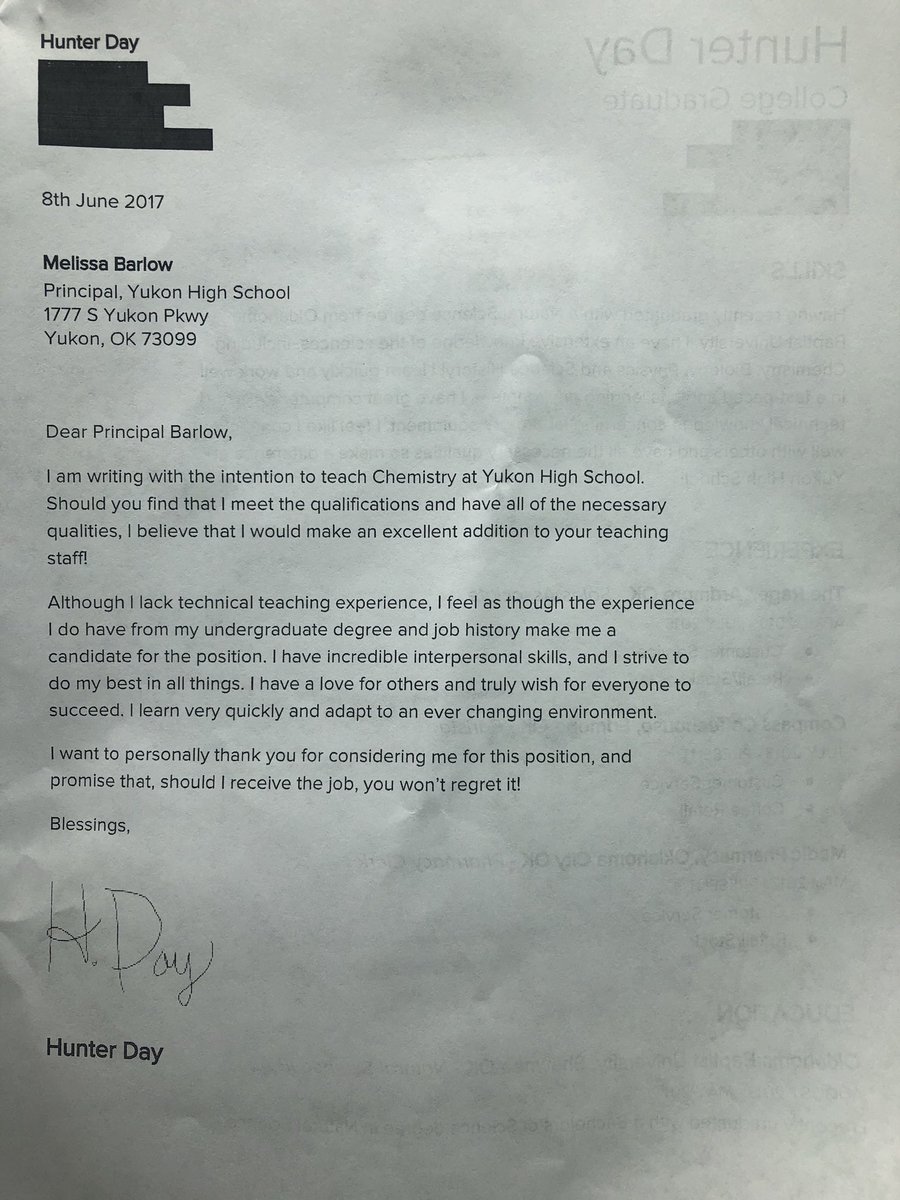 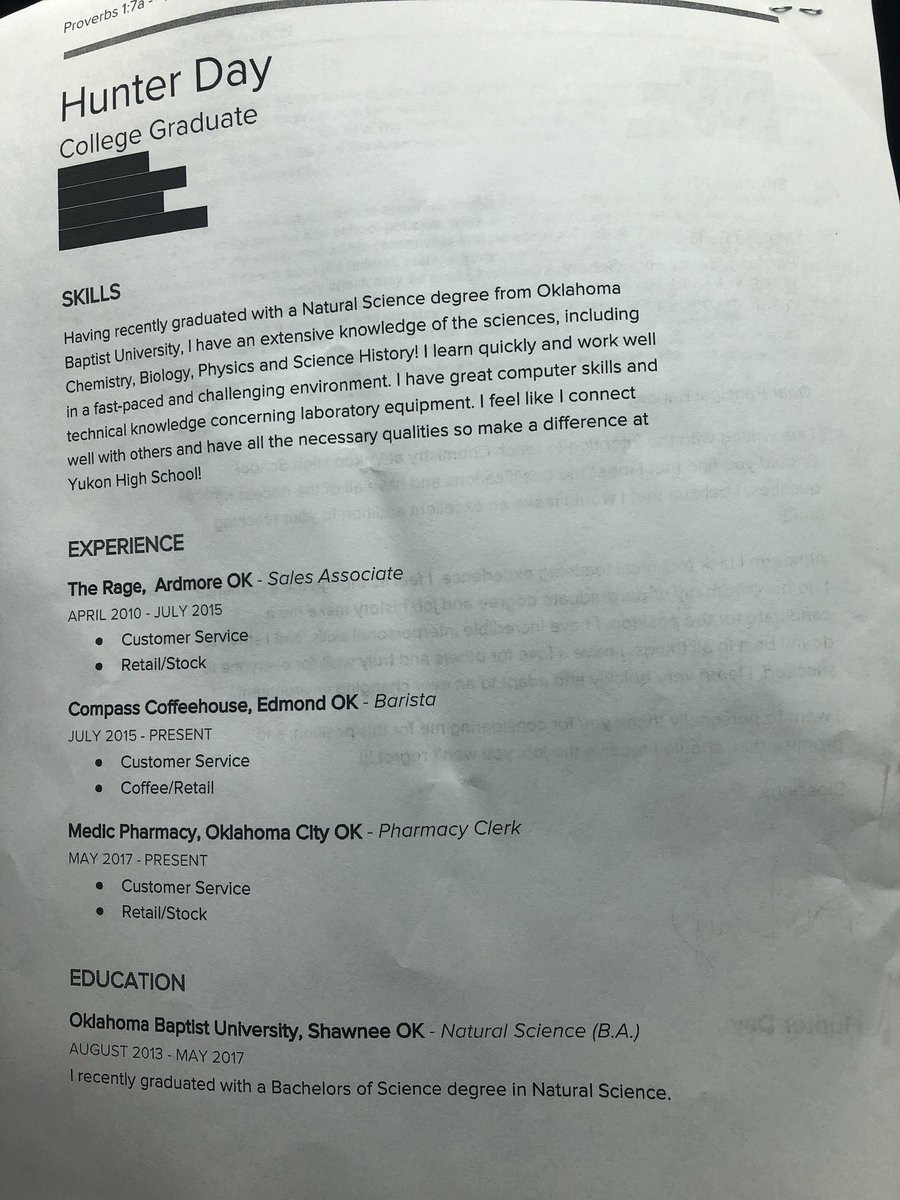 This is Hunter Day’s resume and letter of interest submitted when applying for a teaching position at Yukon High School. It appears Day had only been working for the district for about 6 months. Superintendent says she was an emergency certified teacher. @OKCFOX