Shopping online is very convenient especially if you do not have so much time to go the store to buy the things you need. However, after a couple received marijuana with their order of plastic bins for sure they are going to think twice before online shopping.

A couple who lives from Orlando has ordered from Amazon a 27-gallon plastic storage bins. When the order was delivered they were terrified to see a 65-pound of marijuana on the box along with their original purchase. The couple was really surprised by the weight of the marijuana. One of the couples speak up and said: “They were extremely heavy, heavier than you would think from ordering four empty bins. When the first officer got here she was in disbelief.” 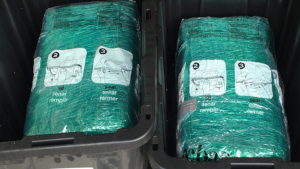 The couple has hidden there identity to protect themselves from the drug dealer that might come to their house and recover the heavyweight marijuana. One of the partners said: “We were still pretty fearful our home would be broken into, and we didn’t sleep there for a few days.”

Scared of their safety, they immediately called the Orlando police for help. When the authority arrives at their home, the marijuana was confiscated. WFTV Reported, Amazon’s Warehouse Deals has shipped the item via UPS from Massachusetts.


The affected couple has reached out to Amazon but did not receive any apology from the company, but they were compensated with $150 gift card. Amazon company has released a statement about the issue: “Our customer service team worked directly with the customer to address concerns and will work with law enforcement to investigate the case, as needed.”  To resolve the issue Orlando police are working with Amazon company.

This news got plenty of reaction from the reader, here are some of their comments:

“So their order came in with a bonus of $260k plus depending and their first impression was to call the police. Why are Floridians so stupid.”

“Amazon running a little customer appreciation special this week. get your free exciting gift with every order!!!”

“Why would anyone order plastic storage bins from Amazon? You can get them at any dollar store, Walmart, Target, etc.”


Previous [WATCH] Somali Refugees Harass Reporter, Then Senior Citizen Goes Thug When She Runs Them Over With SCOOTER