Bidhya Sagar Das, 33, is accused killing Gabriel and leaving his sister Maria in a critical condition in the attack in Finsbury Park, north London, on Saturday.

A huge search was launched after Das left  Finsbury Park flat in London’s northern suburbs, shortly before authorites discovered the dead baby and his critically ill twin sister. Das is believed to be the partner of the twins’ mum, named locally as Cristinela Datcu, who went out and screamed for help in the street after discovering the tragic incident last night.

Stunned neighbours allegdly reported seeing the two children being carried from the flat after devastated mum Cristinela shouted out to the street “my kids, my kids, help me!”

The twins were then taken to an East London hospital where the boy died in the early hours of Sunday morning, despite the best efforts of medical professionals while his twin sister is suffering in a coma and is receiving a specialist medical care. 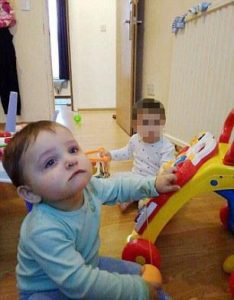 Forensics officers were seen taking pictures of an orange and black claw hammer that they found in a sandbag around the corner from the flat where the children were brutally assaulted.

Detective Chief Inspector Dave Whellams, of the Homicide and Major Crime Command, said: “This is clearly a tragic incident, and our thoughts are with the family of the two young children.

Das is Indian and worked as a night receptionist at The Pembury Hotel round the corner for seven years. He also worked with the mum at the Central Park Hotel on the same street. A huge police hunt was launched for Bidhya Sagar Das and cops have been searching a number of properties around the hotel where he works and as well as the hotel’s staff accommodation.

Police began an investigation with a number of officers seen going in and a police car was parked in front of the house all morning. Officers have been searching the house and other properties along the north London street.

The suspect was arrested at about 7.15pm in Hackney, London, following a dramatic 20-hour manhunt, he is charged Das with the murder of his one-year-old Gabriel and attempted murder of his twin sister Maria.


Previous Are You On The Cop’s Side Or The Teen’s Side In This Controversial Arrest Video?

Next McCain’s Secret He Tried To Take To His Grave Has Just Been Exposed!