These harrowing photographs show how meningitis ravaged a schoolgirl’s body – days after she was a bridesmaid at her parents’ wedding.

Brogan-Lei was left fighting for her life less than a fortnight after she walked down the aisle with parents Aimee and Craig Partridge.

The potentially fatal disease struck while the seven-year-old was on a family honeymoon in Cornwall.

It left her battling the same infection which killed tragic toddler Faye Burdett in February. 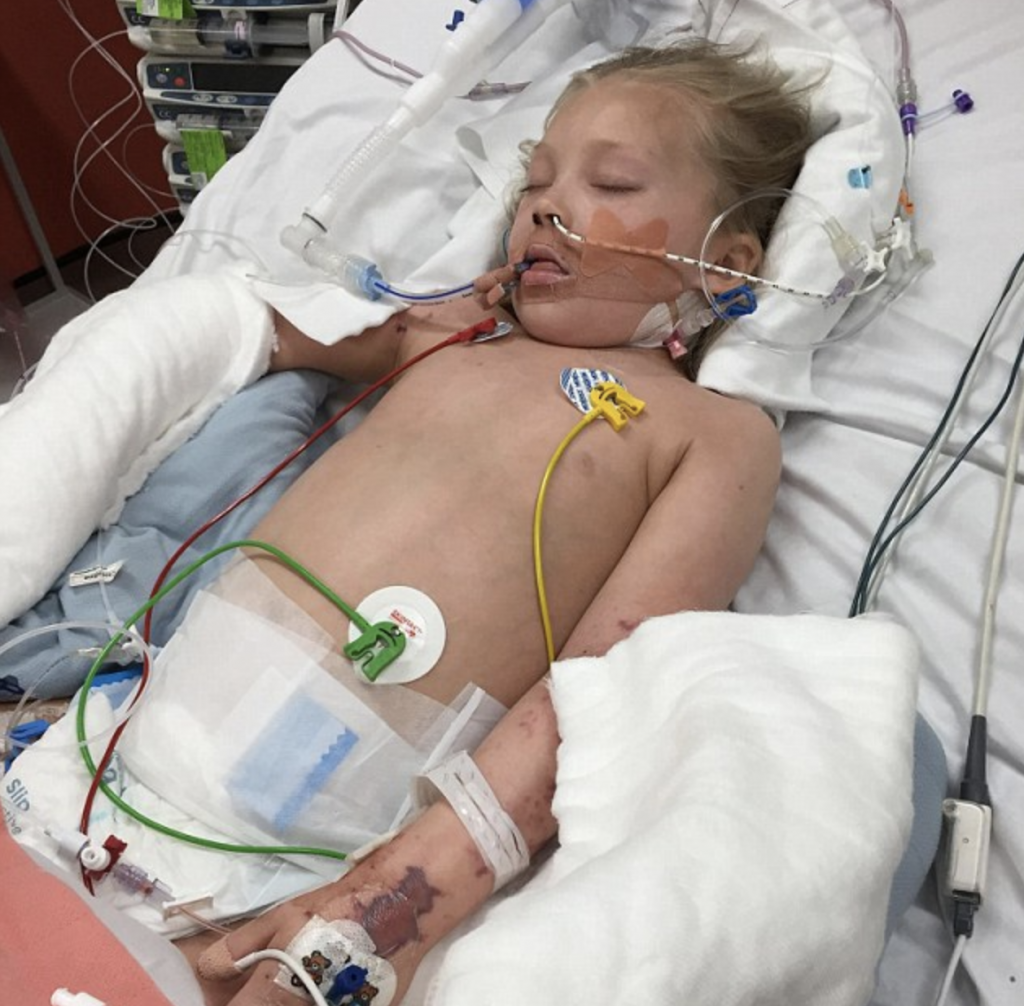 Brogan’s parents agreed to publish pictures of her at Birmingham Children’s Hospital where they said she had been saved ‘100 times already’. 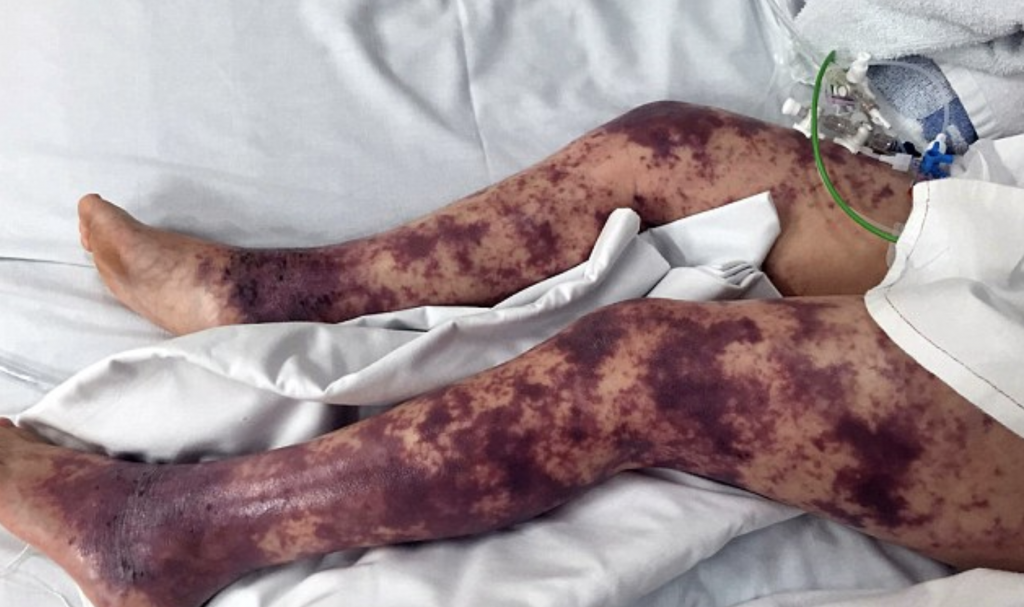 Brogan is now responding to treatment but faces surgery to remove toes on her left foot, and several skin grafts to repair damage to her legs.

‘This week has totally changed my outlook on life,’ said Mrs. Partridge, 25.

‘It has shown what’s important and what isn’t, who’s there and who isn’t.

‘All the little things we thought were important to us suddenly aren’t anymore. 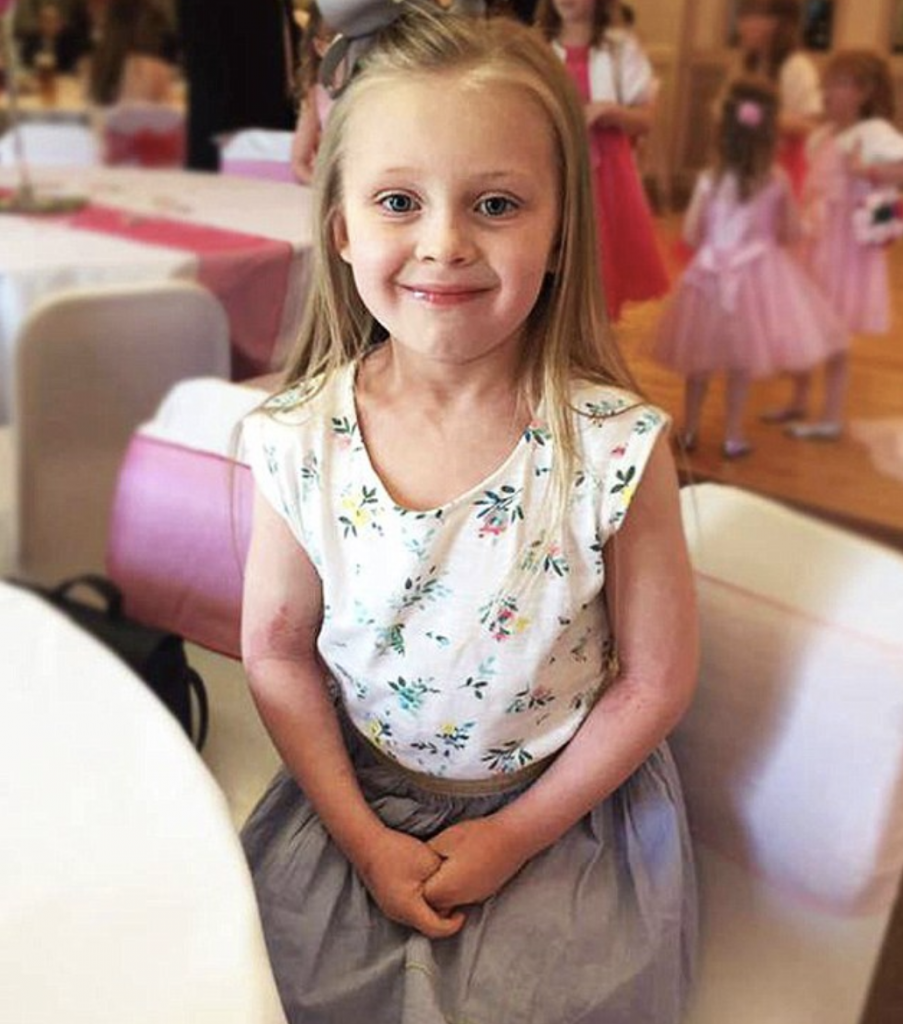 ‘Me and Craig just want to remind everyone how overwhelmed and grateful we are for all the help and offers we’ve received from people near and far.’

Brogan, who has a brother and two sisters, was struck with a suspected eye infection following the wedding, which took place on June 18.

She was given antibiotics but was rushed to hospital on June 27 after the family returned from Cornwall.

Her mother noticed a rash on her daughter’s skin and went to see their GP before she was rushed to the hospital.

Doctors diagnosed the deadly bacterial infection which had already done so much damage they feared she would lose her foot.

But thankfully she rallied and now medics are hopeful she will only need a few toes removing.

Friends and relatives have launched a fundraising campaign for Brogan and the Children’s Hospital, which had reached more than £2,000.

Speaking through a friend, the trainee midwife and car parts worker Mr. Partridge, 29, said: ‘We would like to raise awareness for Meningitis B and the symptoms.

‘There isn’t a standard immunization through the NHS and a lot of people are unaware of the dangers because the infection disguises itself in among common bugs.’

Their awareness drive comes after the release of shocking pictures of two-year-old Faye Burdett who died earlier this year.

Her tragic death sparked a surge in demand for the Bexsero vaccine as worried parents hurried to get their children immunized privately.

She was too old to receive the vaccination under current guidelines, which is available on the NHS for babies aged from two to five months.

Children under the age of one have been vaccinated on the NHS since last year but those born before May 2015 are excluded from the programme.

Mrs. Partridge’s cousin Lisa Reece, 28, from Castle Bromwich, said she could not hold back the tears when she visited Brogan.

‘Nothing can prepare you for what meningitis does to a body, let alone a little seven-year-old girl,’ she said.