Almost 10 years after her son died in Iraq, Patsy Maciel says he sent her a message — delivered through a very special American flag.

Covered in handwritten messages penned by her son’s platoon mates, the flag should have made its way to Maciel nearly a decade ago after the 20-year-old Marine was killed in a helicopter crash.

Instead, it ended up in a flea market hundreds of miles away, on sale for $5 because of the writing on it.

By the time the flag was finally given to Maciel on Saturday evening, the 55-year-old Houston mother was emotionally prepared to receive it. She saw it as a sign from her son that she needed to begin healing.

“If this happened any earlier, there’s no way I would have been able to go out there and receive it because I was an absolute basket case,” Maciel told TODAY.com the day after the exchange. “Now, my heart is at peace.”

Maciel said she believes her son, and a bit of divine intervention, played a role in helping Lanie and Walter Brown find the flag earlier this month at a flea market more than 200 miles away in Hemphill, Texas. Lanie Brown agreed it was practically a miracle they were there at all, since her husband can’t stand such places.

“If it’s not Home Depot or Collectors Firearms, he doesn’t stop and shop,” she recalled with a laugh. But on July 7, his search for a holster led them to the flea market.

“The first room we walked into had a stack of American flags,” she said. “My husband starts going through them and he says, ‘Lanie, come here. Look at this one. It’s got writing on it.’” 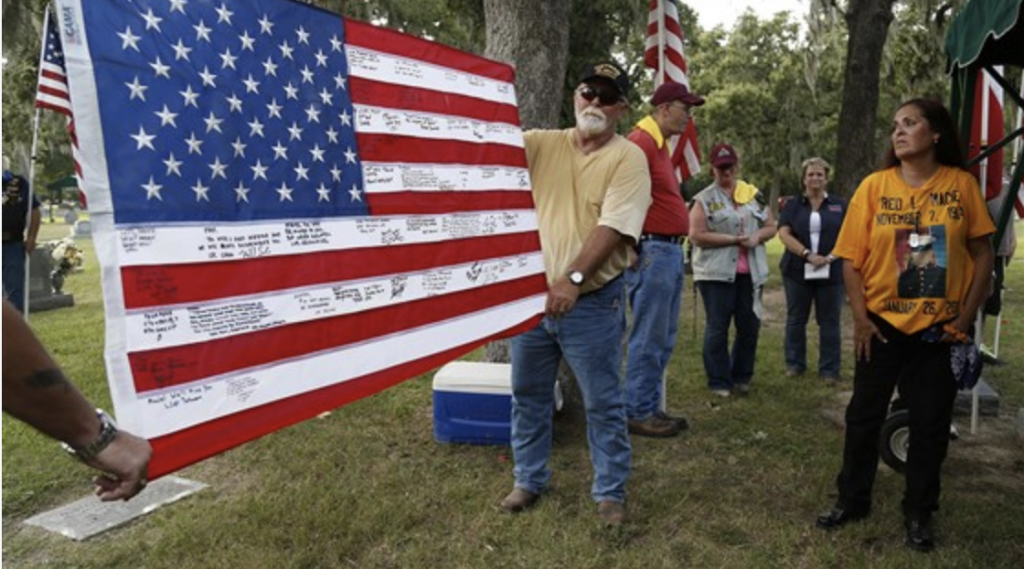 They saw the messages, written in black ink throughout the flag, were dedicated to a fallen lance corporal. The Browns have a son and a son-in-law in the Marines and recognized the title that was mentioned repeatedly.

“We’ll always remember the sacrifice you made. God Bless,” one person wrote.

“We’ll miss those cheeks,” said another.

One other person pledged: “I promise we will see each other again.”


Previous Man Catches Wife Cheating, So He Pulls Out His Phone & Captures Everything On Video

Next Ocasio-Cortez Gets Christmas Wrong On Twitter And Gets DESTROYED