Donald Trump Jr. posted an explicit meme to his Instagram account in response to Democratic Congresswoman Rashida Tlaib calling his dad a “motherf***er” and of course, it is garnering a lot of attention from both sides of the aisle.

“Hey Rashida, guess who just got Ford to ditch their plans for Mexico and send 700 jobs to your home state instead? That’s right, this motherf***er,” the President’s son posted, along with an image of President Trump giving two thumbs up. 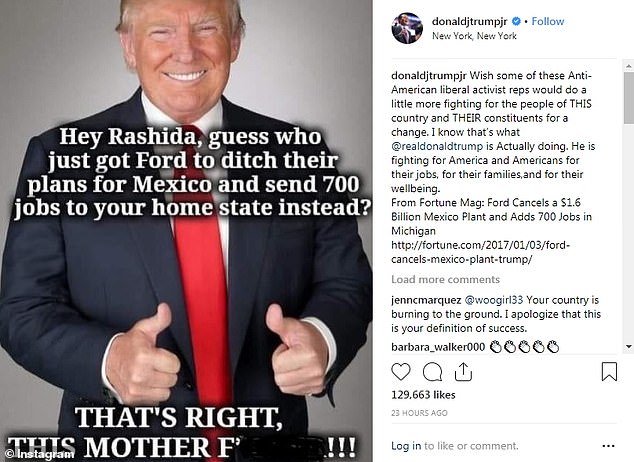 Democrat Tlaib, 42, is the first Palestinian-American woman in Congress, and dropped her F-bomb at the president during a party hosted by the liberal group MoveOn.


She told a cheering crowd that she had told one of her young sons: ‘We’re going to impeach the motherf***er!’

But on Wednesday Trump Jr took to social media, writing: ‘Wish some of these Anti-American liberal activist reps would do a little more fighting for the people of THIS country and THEIR constituents for a change.

‘I know that’s what @realdonaldtrump is Actually doing. He is fighting for America and Americans for their jobs, for their families,and for their wellbeing.’

Tlaib apologized for her language but not for calling for President Trump’s impeachment, saying she only regretted the distraction her words caused.

She tweeted: ‘I will always speak truth to power. #unapologeticallyMe.’

“We’re going to go in and impeach the motherfucker” pic.twitter.com/oQJYqR78IA

Of course, the liberal rag Huffington Post lost their marbles when they saw what Jr. posted.

But with the sharing of this meme, Trump’s son ended up calling his dad the same term…

@RashidaTlaib I just wanna Wholeheartedly endorse your use of & clarity of purpose when declaring your Motherfucking goal last week.Calling that Muthafukkah a Motherfucker is not an issue,calling that Muthaffuqah President Is!!!#motherfuckeristoogoodtowasteonthatcankersore

Trump Jr. caught heat on Tuesday for comparing his father’s proposed wall on the U.S.-Mexico border to a fence at a zoo:

Immigrants as caged animals, from the First Son pic.twitter.com/nsAJRASvnM

Let us know what you think about this meme…..Did Trump Jr. go too far with this image or is he just fighting the same way liberals are?