When Harley-Davidson dealership owner Dennis Packee wrote a letter to a soldier’s wife, he never expected it to go viral. He was only trying to reach out to an individual who he knew was going through a struggle. And although he wrote the letter from his heart, he could never have guessed that it would touch so many thousands when it was later shared online.

Before he was deployed overseas, Christopher Walters rented a space to store his motorcycle at Reiman’s Harley-Davidson. While he was away, his wife Jaime failed to stay on top of the rental space payments. With two children to watch over, she was overwhelmed with all the responsibility now that Christopher had left for his tour of duty.

Because unexpected problems popped up, Jaime fell behind on the Harley-Davidson payments. And when she realized her mistake, she sent the late check in the mail with a long apology. Now Dennis Packee’s response has gone viral…

In her letter, Jamie explained why the payment was late. And when Dennis read her reason, he refused to take her money. He knew that she needed it more than him. “You send that money back to her,” he told his office employee. “I never, ever!”

Decades ago, Dennis was almost drafted into the Vietnam War. But when he had his medical examined, he was discharged. Since then, he has understood the sacrifices the men and women who serve America make on a regular basis.

And Dennis has always been looking for creative ways to give back. When he saw Jamie’s letter and late payment, he knew this was one of those opportunities. Accepting Jamie’s money was not only a problem for Dennis, it was against a policy Dennis instituted more than 18 years ago.

He wrote back to Jamie, returning her money, and explaining the dealership policy.

“Enclosed, you will find the check you mailed to us regarding the account of Christopher,” Dennis’s letter read. “It is the policy of Reiman’s Harley-Davidson to waive storage fees for our active duty service members who are deployed. It is our honor to keep your bike safe and secure while you provide us with our freedoms.”

And he forgot all about it… 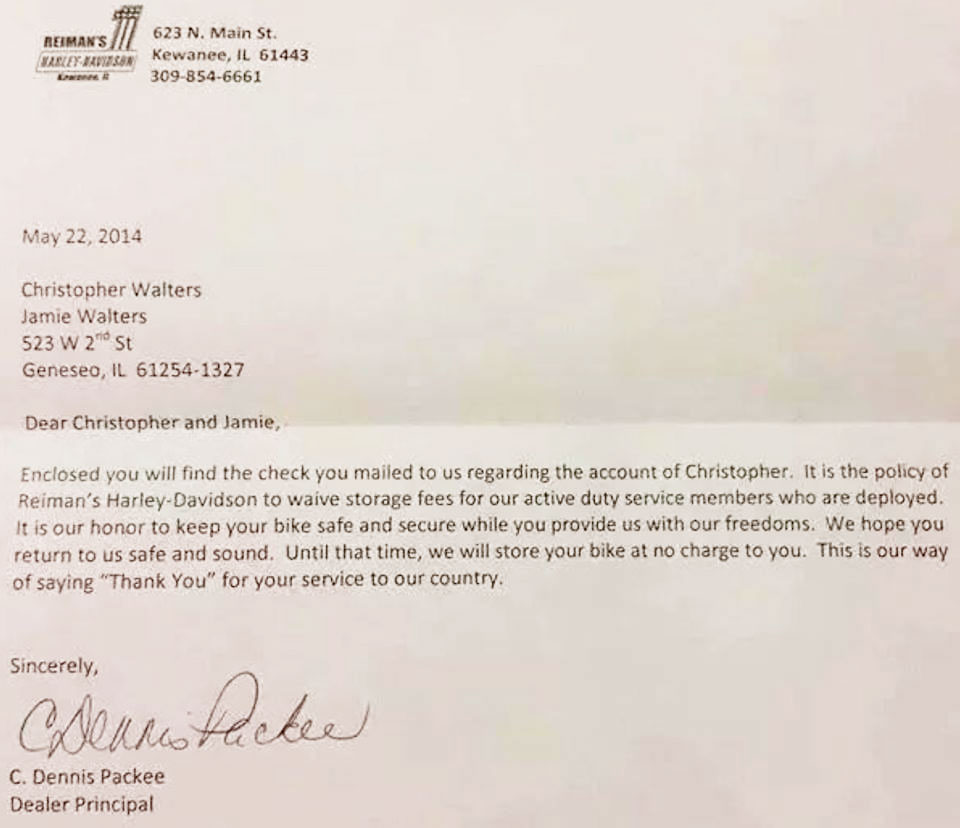 Next Can You Spot The Reason This Image Of A Woman Went Viral?